Press Pass LA sat down with Brendon Small who recently released his second “Galaktikon” record via Megaforce Records to discuss his insight into the recording process and idea behind this immense album.

This album will transport you to another dimension and as your imagination expands, brutal riffs will add emotion and power to that trip! Check out what Brendon had to say about the record below. 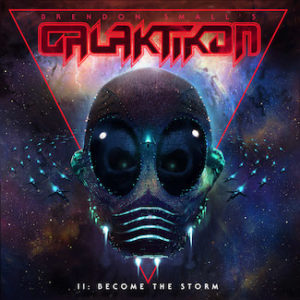 PPLA: The album Galaktikon II- Become The Storm was released on August 25th by Megaforce Records, the first record company to release the first Metallica album ever. What was the experience like working with John and Marza Susula?

Small: I work with Missy and Paul more than with John and Marza. They caught wind that I was making this record. I think I posted something that I was making a record. I wanted to have a distributor and a promoter and they kind of just trusted me without hearing any of the record at all. I think I had put like six records out at the time when they came up to me. They were very supportive. This project was me rebranding in a lot of ways and they understood what I needed to do. They are very calm and easy people to work with.

Small: This is how I sound when I make heavy music. I’m not trying to sound like anything else or extra like something. The cool thing about doing this project is that I can do whatever I want. I can get very melodic with vocals; I can add more what I consider 80’s type synthesizers than I would normally would not use with Dethklok.

Ultimately, no one is telling me what to do, where to go, how to make a song or anything. It is all a series of my decisions in collaboration with musicians and co-producer, Ullrich Wild. You can call it whatever you want to and people do hear the similarities. What people are hearing when they listen to Dethhklok and Galaktikon- they are hearing what I sound like. No one told me to do Dethklok either, I just decided to create it in my way.

Two things happen: when it was recorded, I first had to like it in order to even release it. Then, it is everyone else’s choice to make what they feel about it, and it has been very positive the reaction so far.

PPLA: Do you have a lot of creative riffs? Adding the synthesizers, made it feel more galactic. I know you have Genen Holgan working with you in this record, as well as in Deathklok, so was it an easy process once it came down to tracking and recording?

Small: A lot happens before Gene shows up. I wrote like 30+ songs, and I chose my favorite 11 to make this record. I wrote a lot of material. I wanted to write a lot to be able to have a big collection. Once I decided what songs would be on the record, I programmed all the drums for it and some of the drum programming was very specific and some were very vague. I gave those to Gene about a month before we were going to record so he could get them in his head and see what he wanted to do, because he is a creative and thinking drummer. He doesn’t just think about chops. In fact most of our conversations are not about the chops or feet, they are about feelings. We discuss how can we do a feeling, how do we go from one section to the next. I boil it down to that kind of simplicity, then I have like 3-4 days with Gene which is not a lot. He is that good. He came in and said, “Hey, I don’t think this beat you programmed is even playable.” I had done some complicated thing that didn’t make sense because I am not a drummer. I know how to program within reason, but I’m not a really good drummer. So we have those kinds of discussions.

Bryan Beller comes in, and him and I both went to the same music school so we can communicate using interval and names. We can reharmonize very quickly which is nice. The collaborative process is big but does not take that long. I was very prepared before the record started. I wanted to make sure I didn’t waste any time or money. I then sit down and do my parts, my leads, vocals and keyboards. Writing the song doesn’t take that long, or recording. Doing the vocals at my own studio  takes time because I am still discovering what the feeling of the song is. Pro tools is a sketch pad. I sketch little ideas, the ones I like I draw a little bit darker then I take a look and give myself a lot more time to see which ones are landing for me. That is the thing about music, it’s not like comedy, here I am my own audience and see what is working. That is the process.” 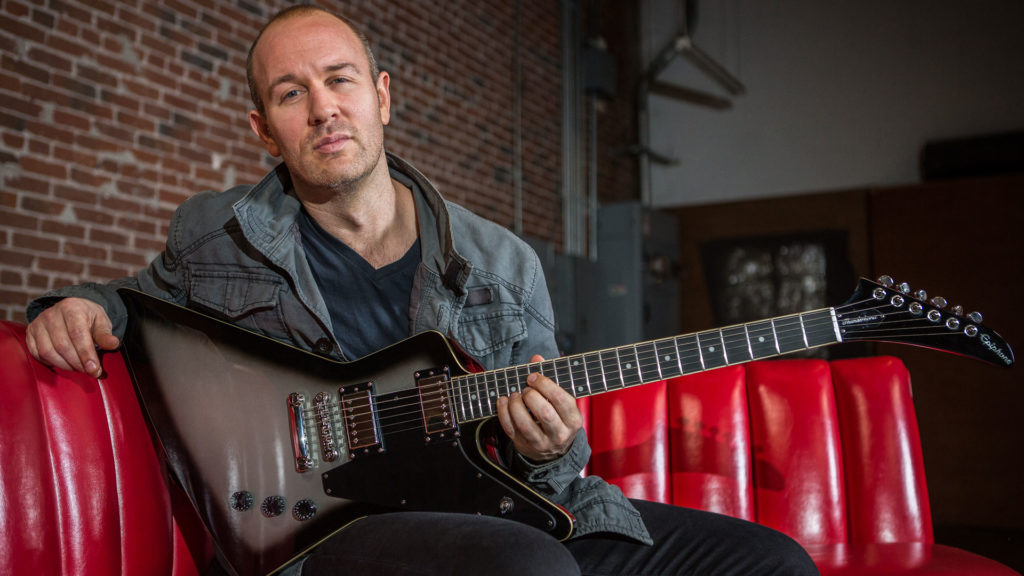 PPLA: Is this a concept album?

Small: No, this is just one big idea, and I am letting the audience discover what the thing is. I am not talking about the story that much. People are talking about the story, something which I can’t confirm or deny. But the whole idea is very much storytelling. The story that I saw in my head…which I needed to work out, the way I work out any story for television. I first outline the whole thing and then think about the important moments and what they would sound like. That helps me guide my writing. I know there needs to be an evil march, and adventures feeling happening in certain places and have a positive ending. It is not a rock opera and it is not a concept opera. It has the drama of a rock opera but the songs can still function to the listener who doesn’t know the whole story.

PPLA: The last track on this album “Rebuilding A Planet”, it has that good feeling effect on it, when you hear it, great satisfaction is bestowed upon you as when you accomplish something good. What that the intention?

Small:  Yes, exactly, that is what I wanted to do. I wanted to have a big epic feeling; I wanted people to feel something. Music is no good if it doesn’t make you feel anything. I mean even the heaviest music of all like Cannibal Corpse, you are feeling some kind of emotion even if it’s rage, horror or fear, whatever it is.

PPLA: What was important to convey to your fans with Galkatikon II- Become The Storm?

Small: I thought very much about how I discovered hard rock, heavy metal, and how it helped me discover my own personality thought music as a kid. I always go back to that, when I discover guitar, heavy music and how it helped me carve my own personality. I think it was very crucial to put a whole project together from that point of view. I thought about me being a kid when I was making this record; I thought about album art, music, and things that influence me.

As a musician, you are only as good as your taste; you are only as good as the people you look up to because those are going to influence you. If you like bands that sound really good, there is chance. If you like bands that don’t sound really good, there is a chance you won’t be good. I thought about this whole cosmic world and tried to just close my eyes and imagine things. I want people’s imagination to make what they want, forget about my words. Through the art, and back cover, I wanted people to think that it can live beyond the record, it’s kind of something bigger than it is. It’s not just music, it’s a landscape of a whole universe. Maybe it worked for some people, maybe it will not for others. We are doing many fun things with the Galkatikon name. We have a VR project with Google and Galaktikon that is coming out later this month.We are doing a comic book, with Erick Powell who is known for The Goon. We are telling the whole story, from Galaktikon I; we are just fleshing out the characters and expanding this world that is very different than Metalocalypse but it sounds like me.

PPLA: Will you be touring with Gene and Bryan when it comes down to it?

Small: We are first trying to make sure we have the means to it. Luckily this is doing good, but it is still too early. We have discussed the early stages of touring and ideally I would love to tour with Gene and Bryan. We all get along just great and no one is a drama queen. Everyone has a sense of humor and it is a very relaxed atmosphere, and we really enjoy being with each other on stage.

PPLA:  “Bowling for Ronnie” is taking place in October 6th, will you be attending this year like you did last?

Small: I really don’t think so; I will be visiting my mom, but I really support this cause. I have a great time and get people excited about helping and donating to this cause. I think it is important to see all the heavy metal people come together for this cause. There is so much positivity around Ronnie James and his family and such a tragic loss. He is such an important part of heavy metal and such a influence. I remember listening for the first time to Mob Rules and I couldn’t believe how dynamic and interesting he sounded. I could not believe as a kid that someone could sound so soft and so pretty and make the sound so interesting. But unfortunately, I will not be there this year, but if you can go, make sure to support this great cause.