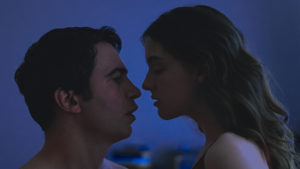 While most 22 year olds nowadays are preparing to enter the post-undergraduate adult world of major debt and 9-5 work days, that isn’t the case for a select few. If you’re Quinn Shephard, you’re in the process of making your directorial debut at one of this country’s largest film festivals with a small and unforgettable indie project titled “Blame”.

“Blame” centers around the life of a slightly unstable teen who returns to school after a mysterious disappearance. After she’s cast as the lead in her school’s play by substitute drama teacher (Chris Messina), she begins to come out of her shell. However, she eventually begins to  grow dangerously and intimately close to her drama teacher. After its Tribeca Film Festival debut on April 22, the film was met with primarily positive reviews. In addition to directing and starring in “Blame”,Shephard also penned the screenplay for it and produced it alongside her mother (Laurie Shephard).

Press Pass LA had the privilege of sitting down on festival grounds to discuss with the young filmmaker’s inspiration behind the film, creative process, and what it means to be a filmmaker in today’s cutthroat business.

Without further adieu, take a look at our fun and insightful interview with the talented Quinn Shephard.

Exclusive: Clip From ‘Blame’ [Tribeca Film Festival] from The Playlist on Vimeo.

This film ties parallels to play “The Crucibles”, which is a popular play discussed within high schools across the country and it also happens to be the play Abigail and the students in the film are performing within the theater department. How did you come up with the overall plot of the film?

I was in a production when I was 15. I was really so enamored by Abigail and the play—playing that role at such a young age was so empowering for me as an actor. When you’re 15 and working professionally in the industry, you’re very limited on the kind of roles you’re going out for and you’re not playing Abigail Williams professionally at 15. So, getting to play that in an original theater where I had room to feel comfortable, play, and be apart of a group of adults that had such immense respect for each other—it made me feel so strong. Exploring that character was like, in a lot of ways, me beginning to explore myself as a young woman for the first time—it was really tied into my coming of age.  As a writer, I thought “Wow, this is a really kind of fascinating thing that is happening that would make a really interesting story. I’ve never read anything like that.’” So, that was the genesis of the idea.

When going into making this film, were there any films that you looked to to inspire your creative process?

I have a lot of favorite films that I think I drew from in little ways, [but] much more I would say visual and stylistic inspiration then I would say plot inspiration. I really love Andrea Arnold and Park Chan-wook. I love “Stoker”, “Donnie Darko”, “American Beauty”, and the visuals of something like “Spring Breakers.” I think there’s a lot of influence from films like that, but story wise, honestly my main inspiration was the weird inside of my own brain and [my] wanting to capture it. For a long time, I felt like the script was so niche [and] that no one else was really going to really get it. People might be like, “Oh, this is cool that you wrote something.” I was really obsessed with it—I was like Abigail in “Blame”-level of obsessed. I wore a corset to school like, was crazy—everyone though I was so weird! I think I just thought no one else is ever going to really get this story. It’s so important to me, but it’s not going to be so important to everyone else. That’s what’s been so cool about debuting it on such a public platform and having such great responses. I feel like people are going, “I do connect with this story”—which is pretty amazing.

“Blame” tells a unique story involving teens that isn’t something that you’d normally see present within the teen genre. How do you go about making this film appealing to teens? Why is this a important film for the teen, young adult demographic to see?

We had a couple of teen girl test screenings when we were in the early stages of our rough cut, and we got feedback. A large reason [this was done] was because I wanted to see how the morals of the film were landing because it is a very morally grey film—that is very much how I am as a director. I don’t like to shove messages down people’s throats. I really think that the film is a strong commentary on the dangers of the over-sexualization of young girls. I do try to do it in a really fun way—the film is sexy, but it also points out what’s disturbing about that. I think it goes back-and-forth between wow this is beautiful, this is sexy, this is fun—but, wow I am uncomfortable. If you’re not uncomfortable, it’s like “why aren’t you uncomfortable?” That’s part of the self-reflection. I hope that teens see it and realize that maybe they shouldn’t feel like they have to force themselves into things they aren’t ready for, but also think about having a lot of empathy for their peers because there may be a lot going on in people’s lives underneath the surface.

You served as the screenwriter, director, producer, and star for this film. Easily deeming you an Oscar in my book for effort. What was it like to wear all those hats while working on this film?

I’m really bad at trusting other people to do all of those things and I think it’s so rare to find people [to do that]. I have two people in the world [that I can trust]—well, maybe a couple of more with some of my key crew. I have a few people on my team who I just love to death—I hope I get to work with them over and over again. There’s really only a handful of people in this world that I would explicitly trust wth creative decisions, primarily that is my mom. She’s the person who I will bounce ideas off of and inherently trust whatever she sends back. I was the writer, I definitely had a vision as the director, I definitely wanted to edit it myself because I knew what I wanted the tone of the film to be and I knew how I wanted the scenes to feel. It was brutally difficult doing everything. We really were the sole-producers of the film and every single aspect of the production down to doing contracts, discussing legal terms for music and music production—it was a lot. It had to be done that way.

You’re only 22 and you’ve accomplished so much with “Blame.” What advice would you give to other young, aspiring female filmmakers who wish to follow down a path similar as yours?

Jane Rosenthal, she’s the founder of Tribeca, she said at the director’s brunch “Don’t make the stuff they want you to make. Make the stuff you believe in.” I am a huge proponent of that. I used to push myself when I was really young to be brutally honest in my writing and in all of my work. I felt like if I wasn’t brutally honest, it was not worth anything. I said [to myself] “Your voice will not rise above any other voices, or change anyone, or make anyone think. If you’re not so honest that it resonates with people where they’ll be like “Yes, I’ve been there” or “Yes, I feel that.’” So, I constantly push myself to be honest.

This years’ film festival is seeing more women in the forefront not just within leading roles, but behind the scenes as well. What does it mean to you to be a contributor to this shift?

I love it, I love the ladies! If we just celebrated and supported each other, then we’re just going to take over the world. I think that women banning together to make films is like one of the most beautiful things to witness. Working with women directors is so awesome because they’re so much more in tune with the lady things. I’ve worked with a lot of wonderful male directors, [but] there generally is a sensitive touch that I think a lot of women can bring to filming.

Lastly, if it were possible, what advice would you give to your character Abigail?

I would just say “stay true to yourself” because you may feel really weird and like an outcast now, but in like seven years you’re going to make a movie about it and everyone’s going to love it! I wish I could go back and give my former-self a hug, but I also feel like showing this film to people and having them love it is like everyone going back and giving my former-self a hug. It’s so validating to feel like something that was so scary to you, this vulnerable side of you, is being loved and rewarded. It’s a very beautiful feeling.