Hollywood came together for a great cause Friday night at the 21st annual Race to Erase MS gala. Held at the Hyatt Regency Century Plaza, the star-studded evening raised funds and awareness for Multiple Sclerosis.

This year’s gala honored Dean Singleton with the Medal of Hope award and featured a dinner, live auction and performances by Steven Tyler, CeeLo Green and Natalie Cole.

“I’m thrilled to be here. I’m thrilled to support the cause. The auction is reputed to be one of the best. The line-up is unbelievable, and we’re all coming together to find a cure,” said actress Beth Littleford. “I’ve known people afflicted by it; it’s a devastating disease but this is an incredible event which brings so much power behind finding a cure.”

The powerful person always behind the power of Race to Erase MS was the night’s host Nancy Davis, an MS survivor who has made significant strides to find the cause and cure of the disease. The Race to Erase MS has contributed to seven of the nine currently FDA approved medications.

Resurrection star Frances Fisher has been a long-time supporter of Davis’s work with MS and believes her notable achievements are no doubt leading towards a cure. “I was at Nancy’s first Race to Erase MS when it was an athletic event and I have supported it all these years. I have seen her heal herself. It’s amazing what she has done; that she hasn’t just stayed inside hiding; that she has gone out there and let everybody know about this terrible disease and has raised so much money for research, that I do believe we are going to find a cure for MS in our lifetime.”

Like Fisher, Carmen Electra also praised Davis’s accomplishments with MS and shared the life-changing impact she has had on her life. “I have been part of Race to Erase since the beginning of my career. Nancy Davis has been just an amazing, incredible woman, personally in my life. She touched me in a way that probably a lot of people don’t realize,” said Electra. “My mother passed away to Cancer and when my mom was really sick she told this woman that I was very close to to take care of me. And she’s my rock and like my mother here in Los Angeles, and when a doctor told her she has MS, right away I called Nancy and Nancy sent her to the right doctors, the right hospital and to all the right care to help her.When she was tested, she found out she doesn’t have MS; there were other issues. And it goes to show you how you have to be really careful and get a second opinion, always because she would have been treated for something that she doesn’t have. And Nancy was an angel. I reached out; I didn’t really know her at the time. She got back to me immediately and gave me all the information and even talked to my friend on the phone and got her in the right place. And so forever I owe her so much. I love being a part of this night.” 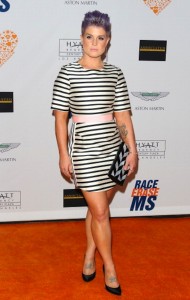 Kathy Hilton, who has been supporting MS fund-raising and research for the past 32 years, also enjoys being a part of the Race to Erase MS galas.“I’m here every year. My mother-in-law suffered from Multiple Sclerosis,” said Hilton, who wore an original Kathy Hilton designed dress and attended with her husband, Richard Hilton.

While there were many veteran attendees of the Race to Erase MS gala, this year was a first for Candace Cameron-Bure, whose personal connection to MS encouraged her to come out and support. “I have friends that are affected by MS. I’m so happy to be here,” said Cameron-Bure, who believes that events like this are vital in providing hope to those battling MS. “It’s important to hold events like these and continue to raise money and awareness and just work until they find a cure.”

It was certainly an important event for Lea Thompson as the effects of MS hit very close to home for her.
“I had an aunt that died of MS. I have two really good friends that have MS,” said the “Switched at Birth” actress. “It’s just a terrible, terrible disease and I think it’s wonderful to raise awareness, raise money and raise compassion for people who have MS. This event does that.”

Indeed it does: the event raised over $1.75 million to benefit the Race to Erase MS and its Center Without Walls program, a collaboration of top MS research centers working together as a team on ground-breaking research to treat and ultimately cure MS.

The 21st annual Race to Erase MS gala was without a doubt an inspiring and entertaining evening that provided much hope and encouragement for MS survivors.