The film Complete Unknown takes the audience on a suspenseful journey into the world of a woman of many identities Jenny portrayed by actress Rachel Weisz. The audience is first introduced to Jenny with scenes of her life as different personalities, professions and geographical homes. 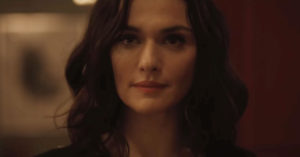 Rachel Weisz delivers an enthralling performance as she struggles with her identity.

It’s only a matter of time before Jenny eventually reunites with Tom, 15 years later to be exact. Enter Clyde, Tom’s work colleague who befriends Jenny now known as “Alice” inside the building’s cafeteria. As a result of their friendship, ambitious Clyde invites her Tom’s upcoming birthday party.

The life of the party, Alice shows off her current identity as a scientific researcher playing sounds of “frogs” from her cell phone. Everything turns awkward, when now married Tom arrives for his own birthday party. During the film, Tom is constantly questioning Jenny (Alice) on everything from her past and present. The interrogations keep coming him and his friends throughout the film.

But it’s only when Tom gets a taste of Alice’s ever- changing world that he begins to understand the allure. After Tom’s birthday party proceeds to a club, he follows Alice as she leaves. While outside they encounter Nina (Kathy Bates) who injures her foot while walking her dog. They help Nina back to her apartment where her husband Roger (Danny Glover) awaits. Tom and Alice both pretend to be doctors who assist Nina.

Later in the night, Alice continues to introduce Tom into her chameleon life from her current job and home. Tom’s intrigue of this life style is apparent through out the film. As Alice prepares to pack for her new identity. Tom has a major decision to make when Alice asks him “want to come with me.”

Will Tom leave everything behind and run away with Alice to a new life? Tom fronts a good poker face, as he leaves no hints, to which way he is swaying. The film will leave you questioning what Tom and Alice’s future will be up to the very last scene. A good film to watch if you want to live vicariously through an identity changer.