RAY GOREN: THE NEXT MUSIC PRODIGY

I remember vividly, when I was fourteen, I was up to no good. It was a definitive point in my life. I was a great student–when I showed up–but nothing was going on beyond that, besides writing. Poems, short stories, the occasional angry letter to the Miami Dolphins upper management over the status of my beloved team. I did nothing of value. Truly, nothing. I smoked mucho pot. That was it. Very unlike Ray Goren. Who is Ray Goren?

He’s a musical prodigy. Seriously–prodigy. Now take a moment, put his name into the memo section of your new iPhone 6, and realize that this young man will be someone to watch in the years to come. Huh? Yeah, you’re probably right. By that time, companies will have something new to hock, that’ll make you feel like you need it. Touché Captain Cattle. I get it. No sense in marking it down into a future paperweight. You’re better off archiving this profile of Ray Goren (On Press Pass LA, of course), the musical prodigy and consummate blues man whose EPs, LA sessions and Save My Soul, are now available.

Ray Goren grew up around music. He started playing piano proficiently by the age of five, eventually transitioning his prowess to Blues guitar by age 8, after stumbling upon concert clips of Eric Clapton and BB King. This self taught wunderkind cites those guitarists as some of his early influencers. He also has a strong love for Stevie Ray Vaughn, Jimi Hendrix, and Albert King.

It was in those early moments of mimicry as a young child, that Ray Goren attached himself to history. The music, with its legends and lore propelled through storied riffs and giant stacks, mesmerize audiences, and keep the sound alive with each lick. The fact that this kid is only fourteen, and has this kind of confidence and understanding of music’s most difficult template (save jazz of course), makes me smile hard.

Why? Because the Blues is a section of the music world that has gotten smaller and smaller, as the legends die off one by one, without creating new ones. Due to the inevitable togetherness of everything in music, the sound is burning out into the embers of an overwhelming smoke coming from the one world sound that has burned over everything. Things used to come from one another. Now, things are just, other things. The Blues came from a section of The Rhythm & Blues, aka R&B. From there came Country, the Rhythm part of the R&B, and country later evolved into rock n’roll. But now, rock is country. Country is Pop. Pop is electronica.

Electronica is actually just sped up hip hop, which is just a bass heavy funk, which in itself is just a bass heavy R&B and Gospel. So if you’re keeping count at home, Rock has become fluffy country, which is twangy pop, which is a less robotic Electronica, which is a more robotic Hip Hop, which is a Bass’d up Funk, which is a sped up R&B, which is just a up Blues’d up Gospel. All this born from the slave songs of the South taught in church. But, the one thing that has always stayed true, amongst all these societal shifts, is the fact that people like this fourteen year old kid are willing to champion the Blues for all of us and keep it alive in its purity. Which shows me, that there is still some hope left for music. Yes, you heard it here folks, write it down, take a picture (Again, you can probably use that future paperweight) I said the words hope and music in the same sentence.

I mean don’t get me wrong. Ray and I spent parts of the interview talking about contemporary music, and like any truly young person growing up in today’s world, Ray likes contemporary music. He mentioned his love for the power in the songs like Latch by Disclosure and Sam Smith, and the performance values of Alicia Keys and Beyoncé. Don’t forget, Ray is a regular high school student. But, it was his mention of the things like evolutionary sound, and the emphasis he had on hard work and practice that make him stand out at this age.

“Music evolves. You can’t force it. It’s unpredictable. The people don’t lie, if it sells fifteen million records–I’m exaggerating obviously–it has to mean something though. They like it. There’s value to it.” He said. “But, it’s also important to find your own sound. You never want to keep making someone else’s.” It made me smile to hear someone of that generation say that. Especially when I found out his top three most influential albums were: Continuum-John Mayer, Voodoo-D’Angelo, and Band of Gypsys-Jimi Hendrix. I mean really, who is this kid? Voodoo? Band of Gypsys? I know adults who can’t hang like that. 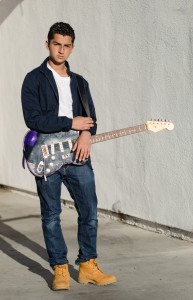 Ray also went on to mention the pros and cons of technology in music. “Technology is good and bad. It can make your instrument sound like anything, but sometimes it can dumb down the stuff that’s made. Especially with vocals. But, at the same time helps those do what would be hard to do otherwise, so it’s good too.”

Truth be told, I was impressed with this young man. His clarity. His vision. The straight head on his shoulders. You can tell he’s been listening to the advice of one of his producers, the great and undeservedly often forgotten–Eddie Kramer. Kramer told Ray to stay away from the extra curricular activities that come with the music.

Drugs most notably, and Ray says that Eddie has nothing to worry about. “He just told me to keep clean. He was really adamant about it. He’s had so many friends die that way, you know. They’re just gone.”

To that I say, good for you, Ray Goren. I hope you have a long and illustrious career, mon ami. Because with all this hard work and smarts, you’re going to deserve it, every step of the way.