Nowadays it seems like almost everyone has a podcast. It can be overwhelming to figure out which shows deserve a spot in your playlist. Don’t worry, we’re going to simplify this for you. Rebel Radio is one podcast you MUST subscribe to! And here’s why…

All culture starts underground, period.  These underground influences continuously spawn new mainstream movements. The hitmakers impacting modern culture today began as underground phenomena and it was their creativity, entrepreneurship, and burning need for self-expression that powered them on a journey from the underground into the spotlight.

Rebel Radio shines a light on these pioneers and their influences, reflecting on the roots and future of underground culture. Their guests are the people who define what we wear, watch, listen to, and play with — and how we spend our spare time and loose change. Rebel Radio gives you an unique glimpse into their lives. So who’s guiding this journey? Host and Rebel Radio Creative Director, Josh Levine.

Levine has built an industry-leading reputation for his discerning eye for talent over his twenty year career which began as a music journalist, writing about fledgling hip-hop culture for such publications as The Source, Vibe, and XXL. He then worked as a talent manager with some of the West Coast’s most credible hip-hop acts, including WC of the Westside Connection. In addition, Josh executive produced a series of compilation CDs for URB Magazine, entitled “Urbal Beats: The Definitive Guide to Electronic Music,” which sold over 500,000 copies.

Today, Josh is the CEO of culture-marketing boutique Rebel Industries, which specializes in connecting leading consumer brands with underground talent. Josh’s work ranges from pairing Mayer Hawthorne with Mazda, to partnering Camarena Tequila with a dozen of the nation’s most credible chefs. He is responsible for integrating Dr. Pepper into the fiercely underground world of competitive video games and shepherding 7UP into the world of EDM. Josh led the most successful culture marketing initiative in the last decade for the launch of Toyota’s Scion division, identifying hundreds of DJs, graffiti artists, street-wear designers, tuners, and nightclub promoters to develop content and events for the brand. We sat down with Josh to discuss why he decided to launch Rebel Radio and why now?
PPLA: What inspired you to start the Rebel Radio podcast?

JL: My whole career has involved connecting with creative people — writing about them, managing them, connecting them with brands. I’m fascinated with what it takes to build a successful career making art and how people overcome the immense obstacles that get in the way. I wanted to spend time with people whose work I admire and explore these issues together.

PPLA:  You have a background in music journalism and artists management, how do you select artists that you think are interview worthy?

JL: Journalism has always been very personal for me. I’ve only ever wanted to interview people whose music I really like, and I’ve been fortunate to have had the opportunity to interview some of my favorites. I’m personally passionate about underground music (and other forms of underground art), and that’s been my focus professionally. The underground is where artists take chances, where the innovation happens, and where people get really creative about their business. When the mainstream route doesn’t work for you or isn’t available to you, you have to come up with new ideas.

PPLA: Are there any artists you wanted to interview but couldn’t secure? Or any artists, entrepreneurs, guests on your wish list now?

JL: Lots! We’re brand new at this. We’ve been relying mostly on our network so far to find guests. We’ll start to go beyond that as people learn about what we’re doing. We have our sights set on some pretty big names in underground culture. There are people out there who are accomplishing amazing things on their own terms. Probably top of my list would be folks like Shepard Fairey, Roy Choi, E-40, Michael Rapaport. People who are redefining what it means to be in their respective fields.

PPLA: What guest has surprised you the most so far and in what way?

JL: Mostly I’m surprised at how receptive people have been to coming on the show. We’re just starting out, but the generosity I’ve seen from people who really don’t need my help has been amazing. I’m also amazed how much I’m learning about our guests, even though I’ve known many of them for more than a decade. You just don’t typically research and interview most people you meet. 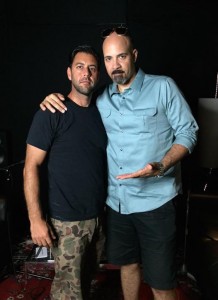 Garth Trinidad (KCRW DJ) was incredibly generous with some of the nice things he said about the show. We don’t know each other that well, but I’m a big fan of what he does on-air. So for him to be as encouraging as he was meant a lot. Our episode airing August 12 features comedian Kira Soltanovich. She’s pretty different from the other guests I’ve had on and our interview might be my favorite so far. She just made me laugh the entire time. I didn’t want it to end.

PPLA: What have been some of the biggest challenges to launching a new podcast? Be it booking artists, promoting, or the technical side of podcasting?

JL: Everything about it has been more work than I expected. It’s tough getting people to conform to our recording schedule. We know nothing about promoting a podcast, so we’re trying things and learning every day. I also have a company to run, so I usually spend the evenings writing and researching for the show after my son goes to bed. But as cliche as it sounds, I’m loving it so it really doesn’t feel like work.

But the biggest challenge is to make it both entertaining and informative. I guess I could have chosen either one as a goal, but this is what I want it to be. I want to make people laugh and also make them think. So I challenge myself on each interview to ask better questions, to keep people on track when they stray, to keep the energy levels high, to challenge people when they say something crazy. My job as host is to keep our guests engaged and also keep them honest, to lead them to give as much as they can, not just to make themselves look good.

PPLA: What has been your greatest success or milestone?

JL: We’re averaging about 5,000 plays per episode, which is incredible. We’re not doing it for the numbers, but it’s great to see that people are actually listening and enjoying what we’re doing. I had no idea what to expect, and if it were 50 plays per episode, that wouldn’t have completely surprised me. That has given me a lot of fuel to keep pushing to improve.

PPLA:  Tell me about how the partnership with EDM.com came about? Do you plan to bring on other partners or seek brand sponsorships down the line?

JL: EDM.com is the best music promotion network on the web. They can take complete unknowns and get hundreds of thousands of listeners to check out the music. They know their stuff and they’re passionate about music. We have that in common. And, their tastes are a little broader than just EDM. If you check out their site, they have R&B, pop, hip hop. Nothing too mainstream but they cover the entire spectrum of underground music (or most of it, anyway).

I’ve become friends with the founders and we’re working on other business together. I told them about the concept for the show and they loved it and offered to come on as a media partner. They’re great about promoting the episodes within their network and their fans are responding, so it’s a great partnership.

We’re definitely considering other partners that will help us reach new audiences. In terms of brand sponsors, I’m not sure I want to be running commercials, but I definitely think we should integrate brands who complement what the show is all about. We have a couple creative ideas that will take a little funding too, so I wouldn’t mind bringing on some partners for that.

PPLA: What are your hopes for the future of the podcast? Where do you see it going?

JL: Well, we’re barely out of the starting gate. My goal is to get better and better as an interviewer so that people want to subscribe and listen to every episode. We’re very music heavy at this point. I think the majority of guests will always be musicians, but I have other areas I want to explore as well. We’ve been shooting video since episode 1. At some point we’re going to launch on YouTube, but we decided to get our game tight with audio first. Eventually, I’d like to be doing live events and looking for other ways to build Rebel Radio as a brand that means something to people.

PPLA:  Any other podcasts you admire or would like to collaborate with?

JL: I’m a big fan of Mortified, and we had the founder Dave Nadelberg on recently (the interview will air in September), so that was really cool. I also really like Kira’s podcast (The Kira Soltanovich Show). There are a few other podcasts I love and definitely want to have them on Rebel Radio: Microphone Check, Ali Shaheed Muhammad; Michael Rapport, Get Up On This; Jensen Carp, Gilles Peterson. 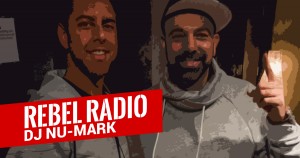