There are very few films that leave you in suspense quite like the spy thriller,  director Francis
Lawrence’s adaptation of Jason Matthew’s novel Red Sparrow is no different. With characters that carry legitimate intrigue and a story that only grows to a fever pitch over time, this will have you second guessing each character’s motives until the very end.

The film focuses on two central characters and their stories, Russian ballet dancer Dominika Egorova and
CIA agent Nate Nash, played by Jennifer Lawrence and Joel Edgerton respectively. After a botching a
mission in Moscow, the CIA has tipped their hand that they have a mole at the highest levels of the
Russian government. Egorova’s uncle Vanya, played by Matthias Schoenaerts, has been tasked by the
President himself to uncover the mole’s identity. Meanwhile, after an accident mid-performance has left
Dominika with no way to pay her mother’s mounting medical bills, she has no choice but to turn to her
uncle for help. He enrolls her in school to become a sparrow; Russian spies who specialize in seduction
to extract information. Before long, Nash meets with Dominika, beginning their chess match attempting
to stay one-step ahead of the other. 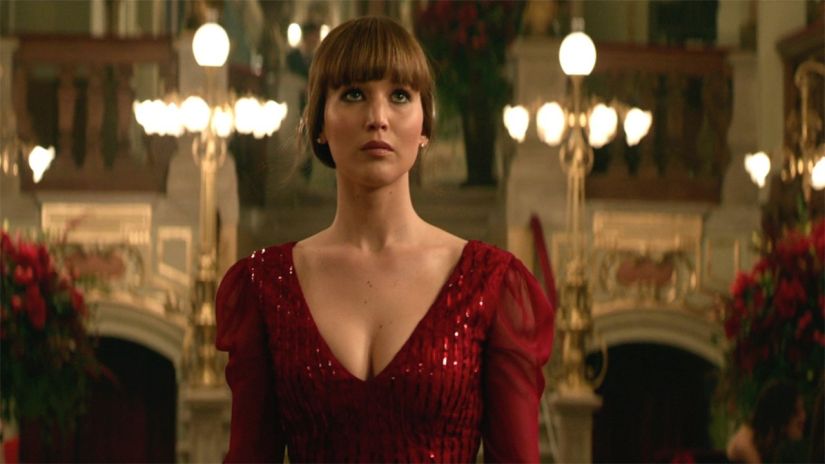 One thing to take note of for any potential moviegoer is that this film, frankly, revels in its hard R-rating.
The amount of violence and nudity can be somewhat off-putting for the casual moviegoer. However, do
not assume that the movie is simply a shock fest devoid of content. The nudity is meant to be shocking
and, over time, is used as a metaphorical transformation from a state of vulnerability to a statement of
comfort, power, and even control. The violence, while grisly and intense, is never done simply for
violence’s sake; but rather, is meant to demonstrate the world that these spies have to live in. As for
Dominika especially, the first time she seems someone murdered it is in the front of the camera, taking
the focus, as she is shocked by things, but over time, they become more and more a part of the
background as she becomes accustomed to her new life.
The acting in this film is superb, and you would expect nothing less from Lawrence, Edgerton, and,
despite having limited screen time, Jeremy Irons. Lawrence especially has really demonstrated growth as
an actress, and taking on roles such as this and 2017’s Mother! have really shown her to go beyond
being “America’s Sweetheart”, or worse, “Hunger Games Star.” Her ability to grow so much in such a
short time is nothing short of impressive, and we continue to look forward to seeing her name in the
marquee for years to come.

The main drawback of this film is its lack of inspirational or even particularly interesting cinematography.
Film is, above all else, a visual medium, and when it is not taken advantage of, it can even the best of
stories and makes them feel watered down, or even lethargic. Even the most suspenseful scenes in the
movie can be left feeling somewhat muted as a result.
Red Sparrow will, likely, not be nominated for any awards or earn any specific nods from critics. It is an
interesting movie, and an entertaining one, but unfortunately, it isn’t especially a standout film. The
acting is remarkably impressive and convincing as you begin to fear for the safety and well-being of the
characters, and the story is likely to leave you guessing as to where each character’s respective loyalties,
or if it’s merely self-preservation. That said, there are other thrillers that do both of these things just as
well if not better, and while the elements that warranted an R-rating do well by the story, they can be
jarring for most. Of all of the adaptations that have come along, this is the quintessential definition of
the book just did it better.