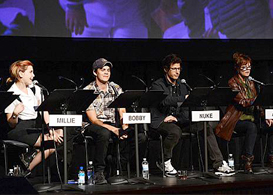 Jason Reitman was pleased to be back at the Bing Theater at LACMA for the second season of his Live Read series, this time with the timeless comedy classic Bull Durham. A unique opportunity for audiences to come see firsthand how actors perform a film in traditional table read fashion, Live Read is one of the most enjoyable, minimalist film going experiences available today.

There is nothing more than a few spotlights, microphones, and the occasional screenshot from the film to enhance the performers on stage. The audience switches from movie watcher to movie listener and sits back for 90 minutes of story time with some of Hollywood’s best actors reading from some of the greatest scripts ever written. Former New York Times film reviewer Elvis Mitchell opens each evening with an anecdote, this time admitting Bull Durham was his favorite screenplay from the ‘80s, as well as a reminder that there is no photography or video allowed, which makes this truly personal experience for just those in attendance.

I was fortunate enough to see a few of the Live Reads last year, from Breakfast Club to The Apartment, each had its own unique tone. The vibe is always euphoric, as the audience is just as excited to see the A-list actors performing as the actors are to be doing a rare live performance. Of course, each Live Read has its share of surprises. Last year’s biggest surprise came during The Princess Bride as Reitman cast director Rob Reiner as the Grandfather, brought back Kevin Savage as the Grandson, called on Paul Rudd to play Westley, and blew our nostalgic minds away as he cast Cary Elwes as Humperdinck.

Bull Durham had its fair share of surprises. JK Simmons took the place of Matthew Modine, who was “late because of he’s new to LA and didn’t realize there’s traffic coming from Venice” (anyone know where he actually was or if he was even confirmed?) Susan Sarandon reprised her role as Annie. But to me, the greatest surprise was seeing writer/director Ron Shelton play Skip. It must have been quite an honor to be brought back to act out a part from his Oscar-nominated script. He performed it with such authority and conviction you felt as though the words were just as fresh in his mind today as they were 25 years ago.

And while the performances were all outstanding, what really resonated for me was the writing itself. This is a perfect example of a script that would never get made today. It came out in what might be considered the heyday for baseball movies – Major League, Angels in the Outfield, The Sandlot, Eight Men Out, Field of Dreams, Little Big League, Mr. Baseball, A League of Their Own. We’ve come to realize the harsh reality that baseball movies are no longer viable, especially in the international marketplace. The script is very humorous, even goofy at times. But at no time does it stop being completely honest. There’s no backstabbing, no villain, and no obstacles for the characters to overcome, except for their own egos. It’s a unique script. An anomaly. And an absolute testament to the power of great screenwriting in that it is still just as powerful and unique a script today as it was then.

Jason Reitman continues to pick winners for his Live Read series. I can’t wait to see the rest.

Next month’s Live Read is November 15 at 7:30pm.
Tickets are available at Film Independent/LACMA.

Hint: Keep your eye on Reitman’s Twitter the week leading up to the show for sneak peaks on who may be performing!