Okay guys, so as well all know, just last week ABC decided to nix one of it’s biggest shows Revenge after four seasons.

While the plot lines were getting crazier and crazier, this show still had a devoted audience that deserved a real farewell to the characters we have grown to know and love over the past four years.  It was obvious that the writers did want to tie up loose ends,  just in case, ABC decided to pull the plug, which as well all know, they did.  It seemed as though the writing in this episode was choppy at best, making it obvious that either a) a lot of things had to be cut out or b) the writers were not planning on this being the last episode EVER and did not adequately prepare.

However, I do not necessarily blame the writers, I blame ABC.  The network should have followed suit with networks like NBC and FOX that cancelled two of their biggest hits (Parenthood and Glee), but still gave the audience a short episode order in the fall to tie up loose ends.  I mean really ABC, would it have been so hard to give Revenge another four episodes in the fall to give the audience some real closure?

With that being said, I was extremely grateful that we finally got to see the much anticipated Amanda and Jack love story finally come together the way it should have long ago.  Viewers got to see what they had been waiting for for four years, and that Revenge writers, was one of your biggest mistakes. I truly wish we could have at least gotten to see Amanda and Jack’s romantic relationship long ago, they really strung us Revenge nerds along for far too long.

Also, the death of David Clark was devastating, however it was in some ways bitter sweet and brought the story full circle, which was poetic.  Although it also was in a way extremely frustrating to feel as though everything Amanda Clark did over the past four seasons was for nothing.  I am sure others have very mixed feelings on this one as well, but I didn’t hate their choice to kill him, because it was realistic, unlike basically every other aspect of this show.

Now to the writing of this episode, which was my biggest issue, was anyone else extremely confused with what was happening for like every second of the series finale?  There were so many things that did not make sense, for starters, Margaux.  Whose team was she really on?  Her scenes made no sense and jumped from her hiring a random hit woman  (Courtney Love) to kill Nolan, to her then trying to save him, and then deciding to turn herself in.  I watched the episode twice and kept on rewinding trying to find something that I missed. 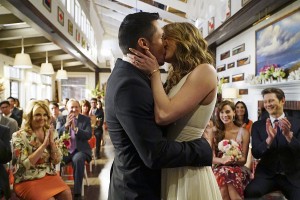 The other plot line that seemed to really puzzle me, was Louise turning Victoria in to Amanda.  I get that she was upset that Victoria faked her death and didn’t clue her in, and yes, she is an unstable woman, however this very strange and fast turn of events did not add up to me.  I felt as though a scene was cut out regarding Louise and Victoria, potentially showing us Louise finding out more lies that Victoria had told or things she had said about her.  This just made very little sense to me, and I do not think I am alone.

Also, did anyone else notice that Once Upon A Time got two hours and Revenge only got one?  If ABC was going to cancel Revenge on such short notice, don’t you think it should have gotten that two hour time slot instead of Once Upon A Time that is renewed for next season?  There also seemed to be more commercials than normal, which again, made me think a lot of the episode was cut out.

One last thing that was really bothering me, were Amanda and Jack going away on his boat forever?  And what about Jack’s son, hello?!  This was a huge oversight that I really wish they cleared up.  Also, no mention of Daniel?  Now thats just plain rude!  At least we got to say our goodbyes to Charlotte, who had been missing for most of the season.

And of course, we finally see Victoria bite the dust.  We all knew this was happening regardless of if the show was picked up for another season, so it was not that big of a shock.  It was also sad and beautiful how David Clark saved Amanda’s “soul” by pulling the trigger to kill his once love Victoria instead of his daughter.  However again, totally unrealistic, both Amanda and David would have been thrown in jail regardless, but hey, I guess I am glad they didn’t.

Was anyone else as frustrated with the series finale of Revenge as we were?  Let us know in the comments below!