The Strokes’ Nick Valensi delivers an impressive debut with his new project, CRX.

The guitar-driven power pop record, New Skin, started as a way for Valensi to continue playing live music. “The Strokes don’t play that often anymore, and when we do it’s awesome, but it got to the point where I needed to balance that out with a project I could take on tour whenever I wanted to,” Valensi says. Accompanied by bassist Jon Safley, keyboardist/vocalist Richie Follin, drummer Ralph Alexander, and guitarist Darian Zahedi, Valensi (also on guitar) adds a new role to his 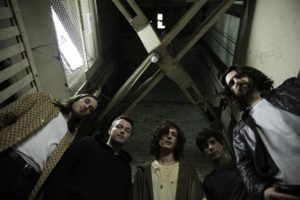 resume – singer/songwriter. “It took me some time to figure out how my voice sounds most natural, and to think about what I wanted to say,” Valensi notes. Lucky for us, the result is a cohesive ten track record sure to please both fans of the Strokes, as well as a new audience yearning for a less electronic, more raw sound.

Recorded at Pink Duck Studios in Burbank, Valensi called on Queens of the Stone Age frontman Josh Homme to produce New Skin – a perfect fit, especially for heavy hitting songs like Unnatural and Walls. For an instant blend of early 2000’s alternative and pop, cue up songs like Anything and Broken Bones. The album also has some sure-to-please live tracks such as Give It Up, which is almost impossible not to clap and tap along to. Two standout tracks, Ways To Fake It and Slow Down, while very different in delivery, contain the essence of this new project – gritty power pop mixed with a nostalgic California dream sound.

You can stream the album now and also check out CRX on tour now: crxmusic.com/tour. The band just passed through Los Angeles for the second time but keep an eye out for their return – you won’t want to miss it.