On a windy night in LA, Dia Frampton told us she was a good friend – and then spilled some secrets.

Dia Frampton’s career is unique. Many people in the crowd at The Hotel Cafe remember her from fronting indie/pop band Meg & Dia with her sister in 2005, others are fans of hers from her stint on The Voice. For the group of people who felt as though they grew up with the singer/songwriter, the Thursday night residency was a rare treat.

In between songs Dia gave us a look inside her heart – nervous about turning 30, nostalgic, 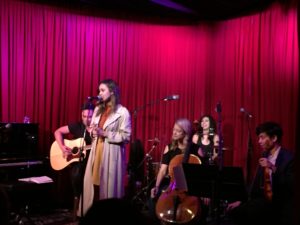 wondering what’s next – her stories were as intimate as the venue, and her song selections were telling. If there is one thing you can hear in Dia’s songs, it’s her yearning for more. Her latest release, Bruises, gives us just that. A mix of 2011’s Red, and the theatric releases from her project Archis, Dia previewed a few songs off the release that felt as heavy as her heart.

One of the most poignant songs of the night was Don’t Look Back, which Dia stated was her 12 year old self writing to her “now self.” Other notable songs of the night included Out of the Dark and Dead Man, both off her latest album.

Running out of time, Dia asked the house if she could go on for half a song more – “I just wanted to end with a message, I did this set list meticulously.” She continued into Die Wild, playing the whole song through, which was the perfect end to the night.

You can catch Dia’s last residency show at the Hotel Cafe on April 6.