Review: Muna At The Fonda

LA’s MUNA brought their headlining tour to The Fonda earlier this month and they did not disappoint.

The last time we caught MUNA live was at their album release show in February at The Teragram Ballroom, and to say a lot has changed since then is an understatement. MUNA has been on a steady rise to the top – from a politically heated performance on Jimmy Kimmel to opening up for Harry 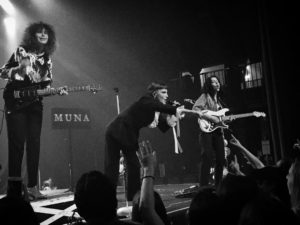 Styles on his solo tour, Katie, Josette and Naomi are changing the game. Their show this October was a testament to their growing popularity – a huge leap from the 600 cap Teragram, The Fonda stage allowed the band to showcase their commanding stage presence to their hometown audience.

Playing nearly their whole debut EP and adding in a few covers, all eyes were on MUNA from start to finish. At times it was hard to determine who was having more fun – the band or the audience. Katie’s vocals were so clean and effortless, paired with the band’s honest and poignant lyrics, there were more than a handful of fans crying through the night. The band plays like they have known each other for more than just the few years they have been together, it’s hard to believe they only have one album under their belt.

In addition to many heartfelt sentiments from the band, MUNA pointed out the diversity of their fan base and looking around the room, you could sense the community MUNA fans feel – among the guitar solos and beats, everyone was safe in that room for a few hours – everyone was free.