As Charles “Lucky” Luciano on AMC’s The Making of the Mob, Rich Graff revives the infamous mob leader who took over the Mafia in New York. Production is set to begin this fall for the second season, Press Pass LA talked with Graff about his current role and upcoming projects.

Originally called to read for a different role, AMC executives later asked Graff to return and read for the lead role of Lucky Luciano. He remembers exactly how they told him, “Listen we love you, the director loves you. Come in, put on a suit and brown contacts.” Days later, he was walking on eggshells until he officially got the role. 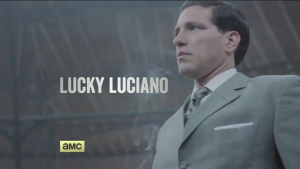 Rich Graff commands the role of Lucky Luciano in AMC’s Making of the Mob.

The Making of the Mob: New York tells the story surrounding the lives of notorious members of the mob including Lucky Luciano, Benjamin “Bugsy” Siegel, Frank Costello and Meyer Lansky. The next season will be primarily based around Al Capone and what he created in Chicago. An outstanding performance by a well-rounded cast, Graff shares what else makes this show stand out from the rest. “What makes our show so good, it’s so reflective on history and certain other facts not exposed,” says Graff.

Who is Rich Graff? Take a look back through his life, and you will see Graff was born to be an entertainer. While in the hospital, he was scouted for a role with Gerber. Growing up in New York, he recounts memories of making movies and storytelling when friends would come over. “When I was young, we could not afford a VCR, so I would take a tape recorder and record the sound and imagine what was going on.” At just 12 years old, Graff would take trips to the movie theatre every Saturday and watch all the movies.

Graff’s dedication to acting has landed him parts on 30 Rock, 666 Park Avenue and Law & Order: Criminal Intent to name a few. Even with the success, he has had to endure difficulties with how competitive it is in show business. “It’s been very hard, no contacts in this business it’s impossible,” says Graff. He describes himself as an actor that doesn’t “fit the molds.”

He prefers to play characters about people living in their own world. “There are not a lot of masculine leading men who are also sensitive,” says Graff. “I like films that are thought provoking, like A Beautiful Mind where the characters are odd.”

Graff’s future aspirations are to work with two of his favorite directors Clint Eastwood and Ridley Scott. Backed with a degree in writing, he has had the opportunity to rewrite some of Lucky Luciano’s script. “That’s my dream to get to the point where I can help in the creative process,” says Graff.

Next up for Graff? Catch him on the upcoming film My Dead Boyfriend alongside Heather Graham and John Corbett. Graff will also star in the film AJA where he will work together with Kathryn Eastwood and Mickey Rourke.