Once again Riot Fest has proven why it is one of the best musical festivals in the country. The three-day, travelling festival made its way through Chicago this past weekend giving the Midwest a healthy dose of some of the best music ever created.

Though marketed as a punk rock festival a look at their lineup shows a fair amount of diversity and a sense of history that most other fests currently lack. Where else will you find Patti Smith and Cheap Trick playing the same day as Dropkick Murphys and Naked Raygun? Riot Fest is what Lollapalooza wishes it could be and what Warped used to be before it embraced pop. Even Lollapalooza’s founder Perry Farrell seems to know this because his band Jane’s Addiction headlined the event’s first night.

By Saturday the rain had stopped but it had left its mark on the festival as crowds waded through the wet mud on their way to the day’s shows. Where Friday may have left many cold and shivering Saturday amped up the energy and reinvigorated the crowd.The three-day weekend in Chicago proved to a roller coaster ride for not just the fans but the musicians as well creating an experience no one will ever forget. Despite a cold, rainy and dreary afternoon the first day of Riot Fest kicked off with a bang. Acts like Mastodon and Gwar put on epic shows that prove why they have such cult followings. They may have only had a short set but Gwar still found time to fight a dinosaur on stage. Slayer picked up where they left off putting on one of their best shows in years later on in the evening.

One must remember, in a festival like this it is next to impossible to see every act. That is why the management seems to have structured it like a really great mixtape. Whether you are seeking old school music, local bands or straight up heavy metal you just simply need to follow your course. The result allows the fest to be satisfying for just about everyone. Unless you’re into pop, this festival is not for you if you’re into that.
Saturday morning started off with the curious but not overly exciting Pizza Underground, led by the ever fascinating Macaulay Culkin. From there it was on to the much more intense Anti-Flag then across the park to The Buzzcocks.

Think about that, The Buzzcocks are on the bill not even the biggest names on it. Stuck with a middle of the afternoon spot the band put on a stellar show albeit one plagued by iffy acoustics which meant they sounded just the tiniest bit off. Still, any trouble they may have had was not on the part of the band which was clearly giving the audience everything it had. Sometimes bands have off days, especially at music fests, it happens.

The anti-climaticness of that was quickly forgotten by the double punch KO mix of The Mighty Mighty Bosstones followed immediately by Me First and the Gimmie Gimmies. Ska fans rejoice! Or in some cases mosh, as many did to Me First’s rendition of “Somewhere Over the Rainbow,” which is truly something you don’t see every day.

The latter half of the day brought two heavy hitters to the same stage, Wu-Tang Clan and The Flaming Lips. Surprisingly, it was Wu-Tang that felt truly off in their set. This is circumstantial more than anything. Like the Buzzcocks they are slaves to their surroundings. Multi-singer rap needs tight spaces to let the words have more impact and, in some cases, actually be heard. The wide open field that is Humboldt park didn’t allow for that and it tended to muffle out most of the lyrics of Wu-Tang’s set. For the most part that wasn’t a problem for fans who knew many of their songs by heart but it did damper the performance a bit. 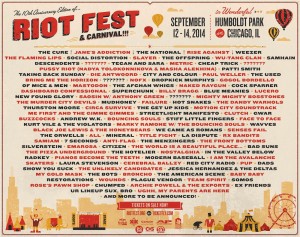 Not so for The Flaming Lips who, as expected, put on a seriously surreal show. Wasting no time in getting to the weirdness started lead singer Wayne Coyne came out in a body suit painted with muscles and joined by a giant dancing rainbow and a couple of dancing mushrooms. By halfway through their first song the band blew a fuse during their famous confetti explosion. Thankfully the problem was solved quickly and they dived head first into “Yoshimi Battles the Pink Robots” followed by an amazing cover of The Chemical Brother’s “Golden Path” which was transcendental live.

Honestly on Sunday, despite the bevy of talented bands that played there was really only one show to see that truly defined the spirit of Riot Fest. No, it’s not The Cure. Chicago’s own Naked Raygun graced the stage in the middle of the afternoon for an hour-long set that brought punks both old and new out of the woodwork in celebration of the bands entire discography.

A birthday cake was brought out to celebrate the festival’s anniversary and its creators thanked the band for being part of the lifeblood of the festival. The show also saw the return of original bassist Pierre Kezdy during the second half the show bringing much of the original lineup back together. Watching them play and knowing just how deep their history with Chicago’s punk scene goes one couldn’t help but feel an overwhelming sense of community and love reaffirmed by hordes or punks young and old crowd surfing and head banging.