This past weekend, we drove out to the Mojave to experience  Rise Festival. For those of you not familiar, aka living under rock, this is the much coveted lantern festival where attendees write their intentions on lanterns and give them a collective voice as their hopes and dreams rise into the desert sky.

However, this year, things did not go as planned.

The festival, now in its fifth year, has gained a reputation for being a truly transformative experience. It started in the Mojave and has since expanded to near Byron Bay, Australia, and is soon to be in Dubai.  If you’ve ever seen a video from one of the festivals your heart is set on fire with the desire to attend!

That’s why, when we were invited this year to not only attend but stay at the Red Rocks Casino & Resort in Vegas, we could not be more excited. Special thanks to The Influence for this amazing invite and opportunity!

The festival takes place on both Friday and Saturday nights with the event being the same both nights featuring music by artists Mardeleva, Harry Hudson, Dean Lewis, and Emmit Fenn, plus two lantern lightings concluding with fire works and the lantern release.  Friday night also included a festival  kick off party at the Palms Casino.

Unfortunately due to other media obligations and nightmarish LA to Vegas traffic (7.5 hours through the windier than usual desert), we didn’t arrive in time to participate in night one. Despite being totally bummed, this did give us (myself and a guest) a bit more time to lounge around the absolutely stunning Red Rocks Casino and Resort.  As if the venue itself didn’t say luxury, we spotted Chrissy Tiegan and John Legend checking in.  Long drive, completely forgotten! 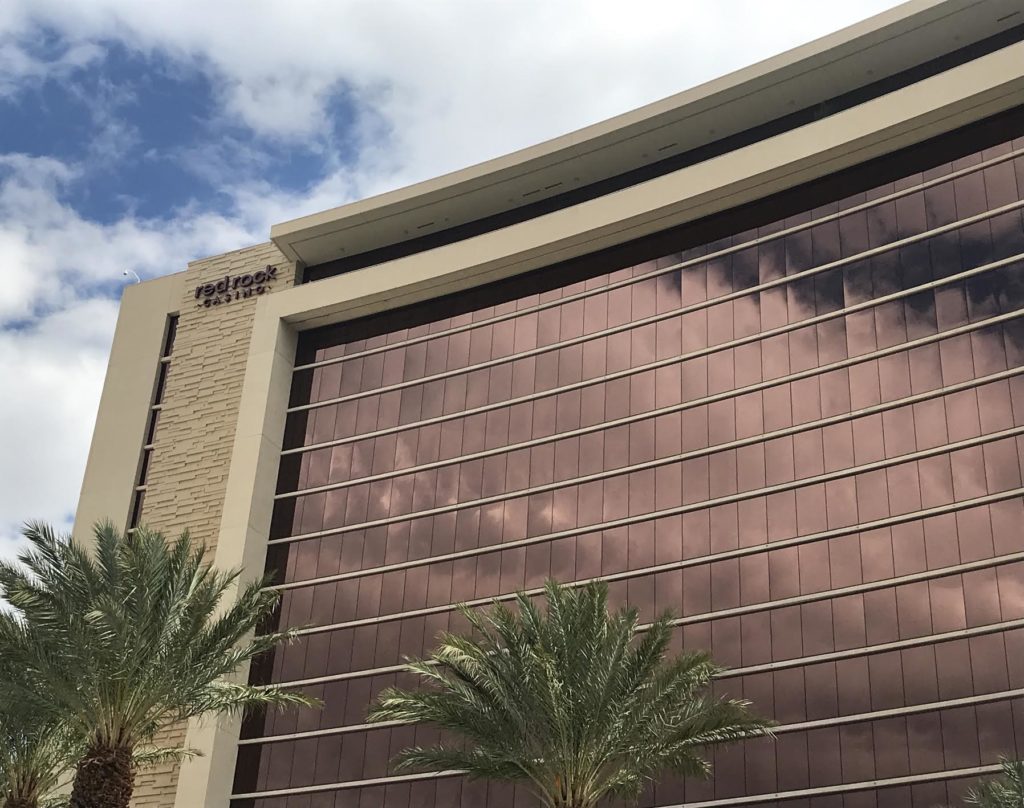 Our room was more like an apartment complete with a great view of the pool and saunas which we took advantage of come early morning. You can watch our full hotel reveal on my  Travel Highlight on IG , perks of being the editor 😉

Before heading out to the Mojave, we indulged in the hotel breakfast buffet which turned out- for better or worse- to be the high point of our day! But in all honesty, it was SO good. Did we mention they had a build your own omelette station and donut bar? If dinner for breakfast is more your thing, they even had a sushi station and meat carving area.

From there, we opted to drive out to Rise Festival, although some great shuttles were provided as a complimentary option. Our decision came from the fact that the weather had been at combination of wind, scattered showers, and occasional sun all morning and my weather app had us seriously worried about the impeding storm ruining the festival and stranding us in the mud.

The drive to the festival was a short 40 minutes and it was very easy to find. We arrived right at the start time of 3:30 and got into the festival without delay and immediately proceeded toward the RISE sign to take a signature picture (seeing there was already a line.)  An hour and a half later, our time for a photo had finally arrived! Yes, you read that right, no lines into the festival but massive wait times for your Instgrammable moment. Say cheese!

In fact, the picture we waited to take turned out so dark with the change in weather that my favorite photo was this side photo bomb taken while getting bored waiting in line. Note to the festival: You need more oversized signs! 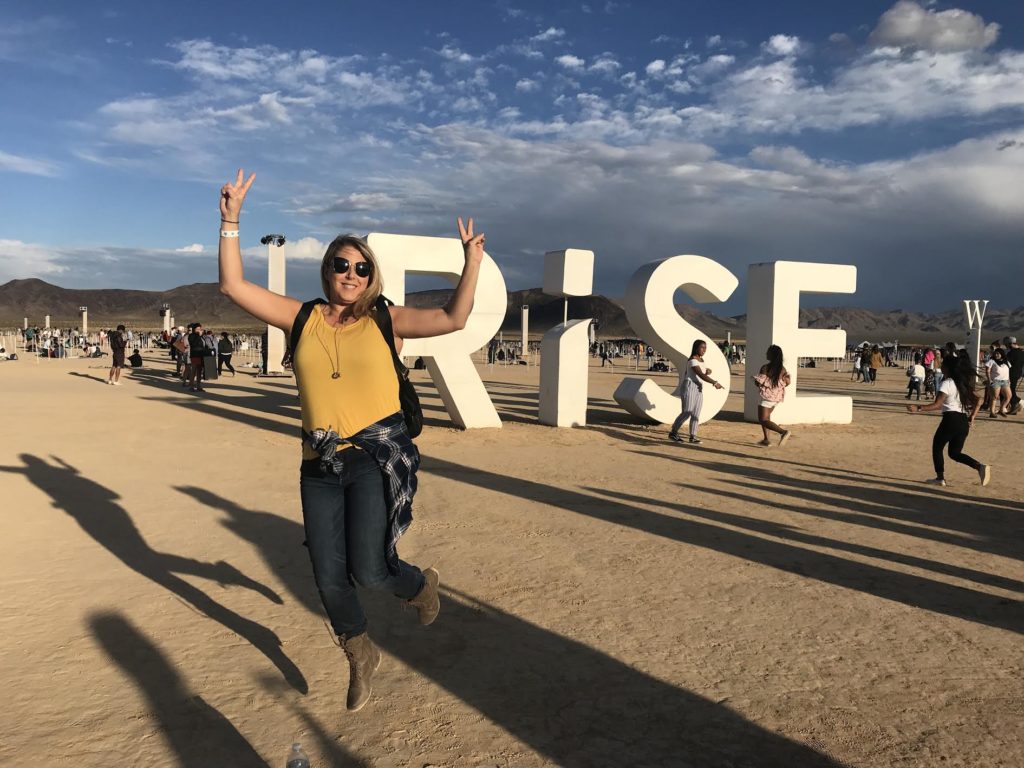 From there, we went to check out the food trunks and pick up our lanterns. The food options were set up around the different quadrants of the circle but the options were limited and the lines were long. If you didn’t want a fajita rice bowl, quesadilla or nachos, you may have found yourself  at a loss. Note #2 for the festival: More food variety. We also were supposed to have VIP access but apparently there was a mixup with the colored wrist bands and the backup/confusion at the VIP area became just another time suck we decided to call a loss.

Luckily, we were able to get our lanterns at general admission and decided to take in the music- which was surprisingly good for lesser known acts- and begin decorating our lanterns.  Note #3 for the festival: Let people know to bring their own markers and decorations since you only provide one black marker. As we headed to claim our spots on the ground, we ran into a woman who was holding two beers and hysterical crying. It was early enough in the evening to be sure the tears were not related to the fistful of drinks. Perhaps it was the positive vibes of the festival, but I found myself asking if she was okay and learned that she had been at the festival the previous year with a friend who had since past. She was back to honor her friend. A long hug later, and I was instantly touched by the movement that is Rise Festival. I share this story because this was just one of the MANY stories that brought people from literally around the world to the middle of nowhere Mojave to light lanterns. The festival is a place for wedding proposals, memorials, dreams, tears, and second chances which is why what happened next made the disappointment all the more devastating for attendees.

Since the moment the sun set, around 6:45pM, it was clear the winds were picking up and a storm was not far off.  In fact, lighting threatened the festival for a good hour in the distance. The organizers had sent an email around 3pm letting attendees know that they intended to light the lanterns early, at first darkness, if the bad weather stayed in the forecast. Everyone rushed to decorate their signs and hold them down to the ground as the wind picked up. I feverishly wrote my very personal intentions on mine and did my best from preventing the lantern from tearing or blowing away. It was not pretty but it was important. No one could understand why the organizers waited a full hour from sunset to allow the storm to progress. 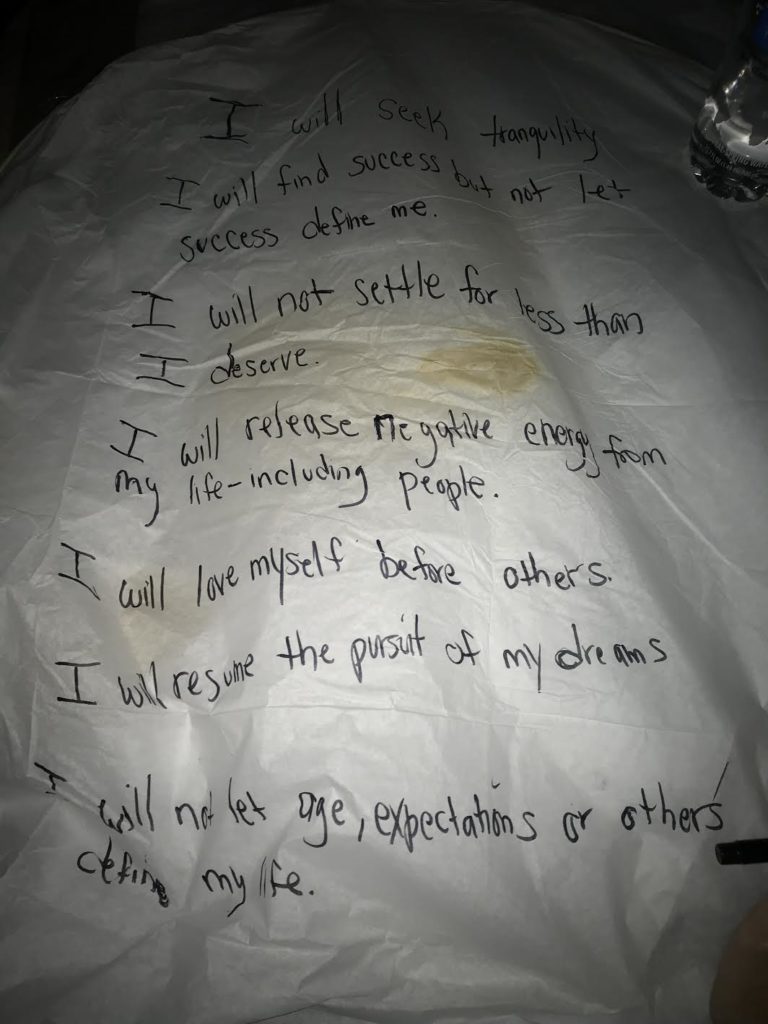 It was now just after 7:45PM and the crowd was getting anxious and rowdy wondering why the lanterns had not yet been lit with the lighting now practically upon us. Suddenly, the festival organizers took the stage and in a very nonchalant manner delivered the news that they would “have to call it” ….meaning the festival and asked everyone to leave their lanterns behind and evacuate immediately. At first festival goers thought it might be a joke.  Then, Pandemonium broke out.

The realization that many had traveled far and wide, spending hard earned money,  to decorate lanterns with their most personal and intimate intentions that would now not only not rise, but become trash, was too much to bear. Some people attempted to dangerously light their lanterns anyway, as others panicked at the site of lighting above and all the electricity of the stage and setup around us. Pushing, running, screaming, and crying were everywhere you looked. There was literally no order and security guards began to rip lanterns from the hands of festival goers who tried to take then with them, threatening huge fines if a lantern left the premises. The organizers added a last comment on the microphone about safety first and that “our wishes still rise” which might as well have been a giant F*&K  you, and was met with anger from the crowd who felt they had waited all day for nothing.

While no one can control mother nature and safety did have to come first, I do believe the organizers made a HUGE mistake in judgement. They had clearly been tracking the storm, as had every attendee, and had sent out the email stating the lighting would happen earlier if bad weather persisted. So why did they not follow their own plan? Were they trying to squeeze every last dollar out of the attendees on food and swag items as many an angry fan wrote on social media? Were they worried about the last performer not getting to play if they moved the lighting up? Did they really just think they could get it all in and decided to gamble on thousands of people’s experience ? Despite the intentions, the judgement call was a very poor one. If they had lit the first lanterns at sundown at the very least, every attendee would have gotten one lantern in the air which would have been infinitely better than thousands of people leaving completely disappointed. Not to mention the complete lack of planning for a clear cut evacuation plan in the event of sudden (which this wasn’t) bad weather. People were running in every direction, the exit path and parking lot were poorly lit, shuttles weren’t there to depart on time because the event ended several hours early, and many drivers were unexpectedly leaving much sooner than they had planned for which wasn’t ideal for anyone who had ventured to have a cocktail. In addition, the exodus happened so quickly that many people were split up when the announcement was made and the chaos began. With the zero cell service, it became almost impossible for people to find each other on location. There was no order to the parking lot and while we luckily made it to our car immediately, we were still stuck in the exit path for almost two hours where we watched soaked, muddy attendees desperately trying to find loved ones, their vehicles, and their sense of gratefulness and calm that had earlier filled the event.  It was truly sad to see what should have been an amazing moment for all turn into such a disaster. Final Note: Better decision making and emergency planning.

While the execution of the event was an epic fail on the part of the organizers, the intention of the event they created  luckily still managed to seep, if not shine through. Before the shock and disappointment, attendees were having a carefree, beautiful experience in the great, vast nothing of the desert and the hope is that getting to write your intentions on the lanterns was release enough of those intentions and emotions.  While physically lighting and releasing them into the sky would have been glorious,  the act of speaking them-either verbally or in written word- still resonated with me once the frustration and anger dissipated.  I truly hope that the festival takes responsibility and reimburses attendees  (weather insurance or otherwise, since it was poor decision making and not weather that ultimately spoiled the event) or offers a complimentary day for those who missed out this year to return and complete their spiritual journey.

As an attendee, I suggest doing your best to make night 1 in case of poor weather, so you at least have two shots to light your lanterns. If night one goes great, gift your tickets to friends and enjoy a night in nearby Sin City night two, or max out on back to back emotional release both nights.