The Get In Touch Foundation held their 2014 LA Pretty in Pink Luncheon & Women of Strength Awards (March 16th) at the Casa del Mar Hotel in Santa Monica. The event was hosted by award winning actor and bestselling author, Rob Lowe.

We caught up with host, Rob Lowe and asked him how it felt to be hosting the event and he said, “It’s exciting! I’ve been involved in breast cancer prevention, awareness charities since 2001 in honor of both my grandmothers and my mother. And so I know firsthand what an important issue this is. So anytime I can be helpful like this, I’m really happy to do it.” 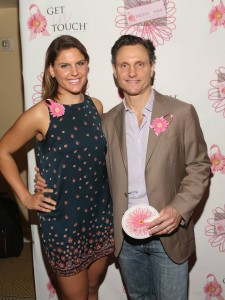 We also had the pleasure of speaking to our favorite, TV President, Tony Goldwyn about his support of the event and he said, “When I heard what they were doing, particularly in terms of education, the fact that we’re not taught this stuff which shocked me and being a father of two daughters, obviously this information is so important. And it’s available; it just doesn’t get talked about.” Tony’s daughter, Anna, attended the event with him. She grew up with the founder, Mary Ann’s daughters, so she has shown support by writing about the Foundation on her Huffington Post blog and being involved as much as she can. The Scandal star wouldn’t spill the beans on any spoilers about the show, but he did say, “It’s been so exciting to be finishing up a third season of the show. It just keeps pushing the envelope further and further. Every week as a cast, we are shocked at what Shonda (Rhimes) and her team comes up with and I think they shock themselves.”

The mission of the Get In Touch Foundation is to provide health initiatives that educate girls and guys of all ages on how to “get in touch” with their bodies, information, and each other in their crusade against breast cancer. Their signature Daisy Wheel educates on how to properly do a breast self-exam.