Rob the Mob is a charming crime-action dramedy based on the true story of a spritely young couple living in 1991 New York City.

The story begins with the two lovers, clearly high, robbing a flower shop on Valentine’s Day. When they are caught, Tommy (Pitt) gets a jail sentence, and Rosie (Arianda) is let free. Fast forward to Tommy’s release: Rosie has landed a job at a collections agency that hires ex-cons and is ready to start a new life. She talks Tommy into getting a job there as well and the two soon move in together. While Tommy also wants to start a new life, he can’t shake his longstanding obsession with the mafia.

Through a series of flashbacks, we learn that Tommy’s father was brutally murdered by the mob when he was a child. His most recent coping mechanism is attending the trial of big mob boss John Gotti where he takes furious notes. Hit man Sammy “The Bull” Gravano provides an in depth testimony which leads to Tommy’s discovery of the secret mob clubs (the extent of these details seem a tad unrealistic, but hey, good for Tommy). Bingo.

What ensues is a series of heists, with Rosie back at the wheel and always on Tommy’s side. While the FBI conducts their own investigation, Tommy and Rosie capture the attention of long time mob reporter Cardozo (Romano) who tells their story vibrantly and much to Rosie’s pleasure. Everything seems to be going smoothly (a little too smoothly) for the pair until they come into possession of an incredible secret that grabs the attention of Big Al—somebody you don’t want to piss off. While Cardozo fights for his sources’ rights to privacy and protection, not everyone has Tommy and Rosie’s best interests in mind. 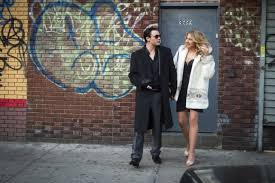 I don’t know if it’s the fact that this is a true story, or if it’s Pitt and Arianda’s magnetic connection, but this film has heart. While some scenes tend to stretch on a bit too long (we get it, you held up the mob and now feel the need to throw your winnings around your apartment while the light catches your gleaming smiles just so…) the characters make it hard to look away. They captivate the essence of the mafia lifestyle and the lengths to which people are willing to go for love and loyalty.