ROB ZOMBIE ROCKS THE ROOF OFF THE ROXY

Last night Rob Zombie tore the roof off of The Roxy Theatre on the Sunset Strip in Los Angeles proving once again why he’s still one of the most influential musicians today. 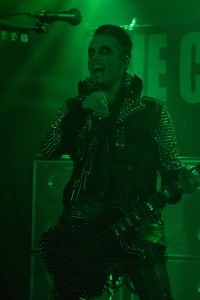 Unlike a normal stop on a tour last night’s show was very freeform and unrehearsed. Of course Rob Zombie, in all his incarnations, has been around for decades now so you would never know it. The singer belted out over a dozen of his songs from the entire span of his career, including a few covers.

The close quarters allowed Zombie to get up close and personal with a lot of his hardcore fans. “Tonight is called A Night with Rob Zombie they never said it would be a night of music,” he joked early in the night after realizing he had been talking a lot between songs. But getting the chance to see the artist in his element, having fun on stage, was part of the joy of the night.

As his career has gotten bigger so has the scale of his shows. His pulse pounding showmanship lends itself to stadium shows perfectly but putting that kind of persona in a venue like The Roxy is magic. The place is smaller than the average nightclub and no matter where you are in the club there isn’t a bad view. Anyone in the first five rows could pretty much reach out and touch the band. Many tried. A few succeeded.

It was a stripped down, warts and all approach to his material that few get the chance to see. The set list included everything from fan favorites like “Living Dead Girl” and “Dragula” to his latest “Well, Everybody is Fucking in a U.F.O.” showcasing his musical range. 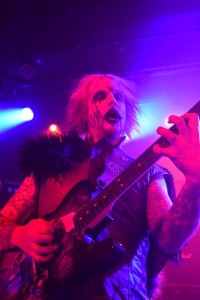 Guitarist John 5 tears it up at The Roxy.

His song “Get Your Boots On! That’s The End of Rock and Roll” which made its debut last night, is a heavy metal valentine to everyone from The Ramones to Buddy Holly. The man knows his music and it shows in every single song.

Truth be told his new album is a departure from his usual work but that should be encouraged, especially this far into the band’s career. A lot of the Electric Warlock album seems to channel Les Claypool and Primus, but that’s a good fit for Zombie’s style and the two compliment each other well.

The biggest surprise of the night came when Zombie called out his good friend Glenn Danzig for a Misfits song that melted everyone’s brains. Danzig is a legend in the metal community and many would have come out to see just him but to watch the two of them tearing it up on stage was heavy metal heaven. Rob Zombie continues to prove time and again that heavy metal not only still has a pulse but is alive, kicking and looking for a fight.