ROCK ON THE RANGE SELLS OUT SECOND YEAR IN A ROW

Selling out for the second year in a row, Rock on the Range has garnered enough attention to bring thousands of people all over the country to central Ohio. With a mix of local acts, established hard rock and metal mainstays and bands that helped to establish the genre, even without completely appealing to everyone in its entirety, there is definitely something there for everyone.

The general format of the event flows to allow the people to see as many different acts as possible. As such, there are three different stages named for each of its respective sponsors. Two of the side stages, brought to you by Ernie Ball Music and Jaegermeister, run simultaneously, so you will have to make a decision between two of the acts. After that, you can head over to the Monster Energy Drink main stage for a different act. With proper time management, it is possible to see upward of 14 music acts a day. However, if those aren’t your cup of tea, there are also a small number of comedians performing in the evening; which could be a welcome reprieve. 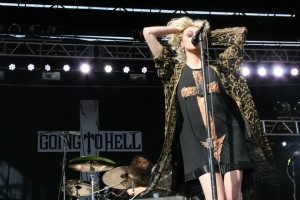 Although each act present deserves its own recognition for accomplishments and talents, particularly some of the international and lesser known local ones, due to aforementioned format – as well as the occasional need for restrooms and food – it’s impossible to give a review of each performer. As such, we will mostly be focusing on a daily evaluation of the acts on the main stage and the show as a whole. However, if you would like a complete list of the performances, you can check out their website at rockontherange.com/2014lineup.html

Friday’s main performers were a great mix of where rock has been and where it is going. Redlight King and Black Stone Cherry were great acts to really get the crowd over the unusually chilly weather, being both engaging as well as fast paced. Following them were big names in the metal community in the form of Killswitch Engage and Black Label Society, the latter of which is led by Zakk Wylde, one of the most revered guitarists having performed with Ozzy Osbourne before starting BLS. Seether and Staind, while not typically known for having the fast paced, heavier music typically associated with the festival, were more than entertaining to the masses; playing their hits and really doing a great job of pitching to the crowd.

Lastly, Guns N Roses took the stage to what can be considered a mixed reaction. Dressing completely uncharacteristically, Axel Rose definitely showed a sign of age as the vocal range just wasn’t on par with what the audience had become accustomed to. However, considering his infamous history with live acts, his performance was still pretty right on and the band did an excellent job. 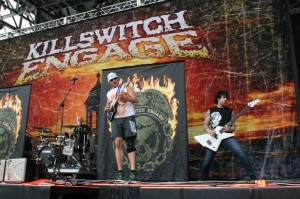 Saturday saw a wider range of acts and music, but fortunately, a stronger stage presence by each of the respective acts. Rev Theory, mainstays of the festival, was a great opening act to get people to ignore the second day of 50 degree rainy weather. Their hit “Hell Yeah” especially was a great crowd song that got things moving. Fuel slowed things down, but that’s not a bad thing; playing their songs that made them famous and entertaining the crowd. Pop Evil and Theory of a Deadman, while solid bands have never had a particularly powerful stage presence and it was felt throughout the stands. Chevelle was able to bring a few back by introducing the audience to its newer songs.

However, it was Slayer that was the act of the night, if not the weekend. Defying age and convention, their twelve act set ran a little long, but that was to NO complaints. Avenged Sevenfold, the main event of the evening had a tough act to follow and did an excellent job. Their mix of heavy metal songs and slower rock jams pushed a wide emotional reaction from the crowd, and never in a negative way.

The weather on Sunday was far more optimal than the previous as for being conductive to a rock concert. It was unfortunate the acts themselves were less than desirable. The way that there was a complete tonal change in-between each was jarring, despite the fact that each of the respective acts in and of themselves were entertaining. Metalcore mainstays Trivium got things moving to say the least, and Adelita’s Way was able to keep things active despite being a different pace. Wolfmother, slowed things down and seemed very reminiscent of bands gone by. Mastodon came back as a big metal band, but the crowd became somewhat down and slowed by Alter Bridge. Five Finger Death Punch, through impressive rock rifts and a very charismatic Ivan Moody, brought things to a fevered pitch, only to be let down by an odd choice in Kid Rock as a finale. 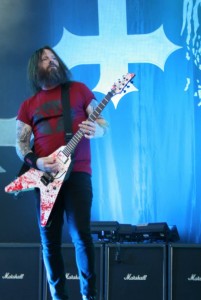 It was an amazing experience, and little wonder why it is growing as one of the largest rock festivals in the U.S. There are some details that need to be hammered out from an organizational perspective, and there are some questionable performer choices, but regardless, there is a lot going on here that should definitely attract any and all rock fans, regardless of genre specifics, age or otherwise. Rock may not be the popular presence it once was on radio stations, but if this weekend is any kind of indication, it is far from dead.