Imagine, walking to a venue in the desert, where the only sound you will hear for the next 10 hours are those of shredding guitars, thunderous drums, gory vocal cords being pushed to the limit and that vibration you feel on the ground from a bass guitar.

Well, Mayhem Festival 2015 held in San Manuel Amphitheater is where that takes place. A sea of black shirts, and an occasional fire pit set ablaze among the crowds might make you unease. This past Saturday I witnessed such an event, one that is forgotten by mainstream media, heavy metal.

This genre has been around since the late 70’s and emerged heavily during the 80’s the main event was no more than F*$%&ng Slayer, the king of horror, King Diamond, Hell Yeah and The Devil Wears Prada- all on the main stage. The Victory Stage Included acts such as Thy Art Is Murder, Sister Sin, Whitechapel and many more.

The younger generation lines up at the doors of the San Manuel Amphitheater to enter and enjoy some of the newer bands, or should I say evolution of metal bands. While the festival pros waited for the two biggest acts on the main stage, Slayer and King Diamond. Walking around you could see Rockstar booths, were the crowd freshened up with complimentary Rockstar beverages. The thick dust rises from the ground as Sister Sin plays a fans favorite track titled “Food for Worms.” The powerful cords of Liv Jagrell (vocalist) synchronize with the heavy riffs and drums giving you that Motorhead speed, and power metal style melody.

Thy Art is Murder is a gruesome death metal band incorporating breakdowns with the crucial velocity of double pedals and guitar solos. The Victory Stage was crowded, the pit was painful and the Music was Heavy, all the right elements for Whitechapel to join the mayhem. Whitechapel emerges into the dusty stage, as it settles briefly right before chaos ensues. Hitting us hard with its double pedal, and down tuned guitars Phil Bozeman (vocalist) roars as the crowd rages and sways side-to-side trampling some fans, soon to be picked up by their peers.

During this nostalgic moment, the heat is forgotten the thirst is quenched with melodic music and horn sightings.  Next to the stage you can see merchandize booths, where you can buy your honorary trophy- by trophy I mean that shirt you can go home and show off to your friends. A badge of honor and exposure to these acts is an investment every heavy metal makes- whether it’s a shirt, patch, or belt buckle it’s a piece you cannot leave a show without. 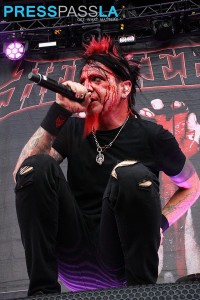 As the sunsets over the mountains, tired and beaten you rush to the main stage to witness the Four big acts of the night.  The Devil Wears Prada is the opening act followed by Hell Yeah- with ex-Pantera drummer Vinnie Paul. “Sangre por Sangre” (“Blood For Blood”) were the chanting words during Hell Yeah’s performance.  A moment of recognition took place to remember those guitarist and heavy metal gods that have passed away. The crowd cried in excitement when Jeff Hanneman’s name was mentioned, Slayer’s guitarist who past away May 2, 2013.

Hell Yeah’s set finishes and the crew starts to set King Diamond’s stage, you can only wonder what the gargoyles are for. The Set looks like a haunted mansion, and the red light backlight is a sign of an ominous act about to be given. King Diamond surfaces from below the stage, unto a dark fogy stage lit by a pentagram in neon blue- the symbol of evil. The one-hour set is a performance unlike others. For a second you feel like you walked in to an Opera, however King Diamond incomparable high pitch vocals and macabre lyrics turn it into a night of horror. Story after story King Diamond impresses the crowd and only paves the path for Slayer.

Slayer was the final closing act, which did not disappoint. With half of the original Slayer band members fans wonder how good are they now, but that question never crossed my mind. Slayer started shredding with a background of flashing words, “Repentless” and inverted fire crosses, yes inverted fire crosses Slayer’s vocalist Tom Araya screamed with passion the words “Repentless.”

While Kerry King and Gary Holt synchronized in the fast neck breaking guitar riffs as Paul Bostaph hammered on the drums. Fire set a blaze behind the band members as The crowd started the pit. Slayer is an act of its own, with the fire and war images, as well as album covers flashing during each song the fire is just a plus. The crowd chanted Hanneman and Slayer as the show ended. Once again Slayer had done it, they outdid themselves.

Check our our full gallery here.