PPLA’s Pandie Suicide sat down with Ernie C, guitarist and songwriter of the infamous Body Count at the Rockstar Energy Drink Mayhem Festival in San Bernadino this past weekend, to talk about touring, the music business, new album Manslaughter, and, of course, appearing on late night TV. 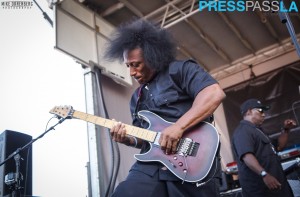 PPLA: So how’s it going how does it feel to be on Mayhem Festival right now?

EC: It feels great. You know Mayhem has been going eight years and this is going to be the biggest one ever, so it feels great to be out here. John Reese (the co-founder of Mayhem Fest) is a friend of mine, I’ve known him since the Guns ‘N Roses days. We haven’t toured together since 1990 when we opened for Guns and Metallica so it’s like a family tour.

EC: No, it feels the same, just the music business has changed. I mean the things we used to do for free they charge for. We used to come out and do meet and greets and sign everybody’s stuff now the record company is like “You can’t do that,” you know it’s about buying these bundles and it’s changed. It’s not for the best but it’s the way it is. For tours to continue that’s what has to happen.

PPLA: That’s true I mean the music industry has changed so much, it’s moving more to a place where you make more money from touring as opposed to the albums.

EC: No, the albums aren’t really…music is free basically, which is not good for the artist, you know what i mean? People forget about that aspect of it. So that’s why ticket prices are so high, there are so many things connected with it. But that’s the way it is if you still want to see live performance, you know. If you don’t want to see that you can just listen to music all day in your house (laughs). But if you want to see bands play you have to pay the price now.

PPLA: Yeah it’s really about the live experience right now. What would you say about your performance today, what can we expect?

EC: I think it’s really good. This band usually plays for an hour and a half so for us to play for 25 minutes, we had to sit down and really try to compress 25 years of music down to 25 minutes! So a minute per year. It’s going to be good. We always have a great time playing. Ice is into it right now, you know, so it’s going to be fun.

 PPLA: You guys have a new album that came out last month, so what was that like? Tell me a little bit about writing, recording the album, how it’s been received?

EC: The album is Manslaughter it’s out on Sumerian Records, and when I was looking for a record company I chose Sumerian because they were young and they were cool and they knew how to do the record that we were trying to do. I mean we’ve been on Warner Bros, we’ve been on Virgin, we’ve been on the big conglomerate record companies but right now they don’t get it. This record company got what we were doing. And we took a month and a half off last year and went to Vegas, and rented a house and lived in the house together and wrote a record. That’s why the record – I mean I really don’t ever blow my own horn – but the record is good (laughs), we really took time and made a good record. I haven’t heard bad reviews on it everyone gets something good from it because we really put sincerity into it. I mean every song on there has….you know we have a song that’s a tribute to our soldiers. Ice was an Airborne Ranger you know he was in the army so that song is true. “Back to Rehab” – I quit drinking five years ago and went to rehab so that song has some truth to it. “Bitch in the Pit” is a song about women being in power. That’s what that song is really about it’s not about a bitch in the pit, it’s about a woman who is in charge of the pit. She’s the bitch controlling all the guys, so it’s empowerment for women (laughs). 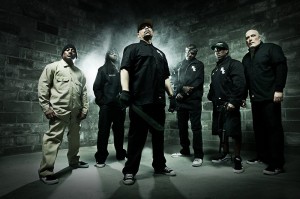 PPLA: So it’s a positive song?

EC: it really is if you take the word ‘bitch’ out of it (laughs), ‘girl in the pit’ you know, ‘just a girl in the pit’ doesn’t sound as good as ‘bitch’! She was a woman that was controlling things so that’s what that was about. ‘Talk s#%t get shot’ that’s a rule of life – you talk too much shit, things can get haywire.

EC: Yeah, yeah exactly. And Body Count is an extreme group so that’s what that’s all about. So you talk s#$t you can get punched, you can get out of the conversation, but getting shot is real extreme.

PPLA: So you’re on Mayhem, you’re on Sumerian, it’s quite an interesting mix to have you guys thrown in with Cannibal Corpse and Suicide Silence, is that something you guys intentionally seek out to do?

EC: Twenty years ago we played with Cannibal Corpse, and Korn opened for us! I think we fit in exactly with these groups. Only thing is Body Count, we have a groove to our songs. Our songs are like almost, I don’t call them pop songs, but they’re songs you can sing along with, they have distinct melodies that you can sing along with, that’s the only thing. It’s not so “metallish” you know like Slayer, we break it down to the simplest digestible terms of music so it won’t get too over-complicated, you know?

PPLA: You guys have been doing a lot of late night TV shows, how’s all that been going?

EC: Years ago we were untouchable, now we’re on these pop shows (laughs). We’re middle of America now you know what I mean, that’s what that really is. When they said we were gonna do all these shows, we were like ‘what the hell are we gonna play?!’ You have to send in your lyric sheets, and they look at the lyric sheets and they’re like ‘now what lyrics are you gonna do?’ We had to send in another lyric sheet, so it’s been fun! Over the past three weeks we’ve been on three late night shows, so we’ve been seen by 20 million people. It’s wild, I mean I can’t explain it.

PPLA: Do you think it’s going to make you even bigger than you have ever been, even though, you know, you guys are Body Count, you are already huge, but what do you think this is going to do?

EC: I think it is. I mean, Ice has gotten more popular since the band has been off. We’ve been off for eight years and he’s been on Law and Order for fifteen now. So he’s gotten bigger over the years. Now people are coming to see him and seeing if it’s for real – seeing if it’s just a novelty, but it’s not a novelty he’s really good in the band

PPLA: And is it for real?

EC: Yeah, it’s very for real because he was a rapper before he was on television. We did records, you know twenty five years ago. I’ve done his rap records, almost thirty years ago. People don’t know that, people have been seeing him on Law and Order thinking this is where he started.

PPLA: So you’re going to do Mayhem and then what are you going to do? Are you guys gonna just keep, keep going with this, is it really on? Or is it just like you’re back for a bit, what do you think? 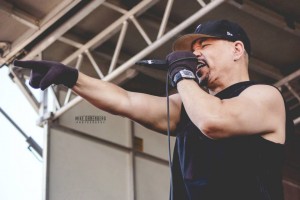 EC: No we’re gonna keep playing, but the thing about it is, when we’re off for like six years it’s hard to get the band back playing again. (If) you’re just going to start playing to do one show, it takes 3-4 months of preparation to play one show. But now the band is rolling so we have to keep on or we’ll just fall apart again. So Ice is going back to do another season of Law and Order but we’re able to do weekends and you know maybe play on the weekends. Next summer we’re planning on doing the festivals in Europe, the big festivals over there and maybe do another record next Summer. So yeah I don’t see it stopping right now, unless something dictates us to stop like the fans, that’s the only reason you stop.

Check out our Rockstar Mayhem Festival photo gallery of all the performers including Trivium, Korn, Avenged Sevenfold, and more! Photos by PPLA Photographer Mike Danenberg. Follow Ernie C on Twitter.