ROGUE NATION THE BEST MISSION YET

I’ve had a hard time understanding why they world made such a ruckus about Tom Cruise hanging off the side of a Airbus A400M.  So what?  I did that twice last week.  Motorcycle chases down an over crowded Moroccan freeway?  That’s just a Sunday walk in the park.

Cruise hasn’t impressed me yet. BUT, a 120 foot dive into a narrow water slide followed by holding his breath for six minutes, all while dodging giant centrifugal robot arms precariously close to your face in order to switch one computer chip so your friend Simon Pegg doesn’t die from electric shock?  (Sorry for the run-on sentence, but it was just that exciting)  Okay Tom, I’m sold.

Mission: Impossible – Rogue Nation is the franchise’s best entry to date.  It’s fifth director in five movies, Christopher McQuarrie, brings a film geek’s obsessiveness to a mega-budget summer blockbuster.  A wise move as each director in the series has brought a different sensibility to the franchise. 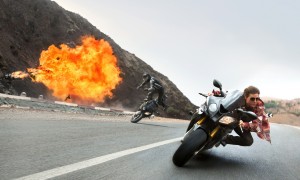 Tom Cruise tears it up in the best Mission Impossible entry yet.

This time around, Cruise and company are on the run from the CIA, while battling the evil Syndicate and Solomon Lane (an especially creepy Sean Harris).  No one in the world believes the Syndicate exists except for our hero and he has just missed them at every turn.

His big break comes when he meets Ilsa Faust (Rebecca Ferguson) under, let’s say, precarious circumstances.  Ferguson plays Faust brilliantly and although it eventually becomes obvious which side she will end up on, much of the movie is guesswork.  Cruise might be the poster-boy for the franchise, but Ferguson steals the show.  Following the vein of this summers surprise hit, Mad Max, Mission features a strong female lead that is mysterious, deep, and saves the day more than once without any man-splaining or hidden sexual harassment (cough Jurrassic World cough) – a refreshing trend.

I hope Cruise keeps this franchise going until his social security kicks in, because like a fine Molotov Cocktail, it only gets better with age.