This Saturday, the Sunset strip was alive and booming with the opening of ROKU, one of West Hollywood’s newest restaurants and hot spots, created by the Innovative Dining Group. Celebrities, writers, and social media influencers were in attendance at the casual, yet decadent event where each party goer got to enjoy food, drinks, and more.

The party was large, and while the stars laid low, they were celebrating the night away along with the rest of the attendees. Rumor Willis stunned in a low cut top, black skirt, and boots and was enjoying the evening taking photos at the photo booth. DWTS pros Emma Slater and Sascha Farber caught up with former DWTS pro (and current I Can Do That host) Cheryl Burke, and GG Golnesa from Shah’s Of Sunset also popped in in an adorable fur vest and army pants. Other stars in attendance were Mark Ballas, Brooke Burke, Derek Hough, Ed Westwick, Adrienne Maloof, Alexis Knapp, Ryan Cabera, and Keo Motsepe. 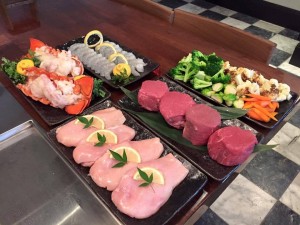 The evening was elegant and beautifully laid out. When entering the party, there were trays of different types of specifically cocktails and wine being served, as well as two full bars. The space completely transformed itself from what it used to be, an Italian restaurant called Riva Bella, into a beautiful Asian fusion theme with dark lighting and patio space. In addition to the cocktails, delicious spicy tuna wasabi tacos were being served, along with an array of different kinds of fish and sushi. There was also a baked crab hand roll bar, which was absolutely out of this world.

However the best food of the evening we have to say, was the fried rice bar in the back of the restaurant, right next to the several grill cook-tops where you could watch the rice being made. One the the most exciting features of ROKU is that it has three large teppanyaki grill tables, just like at Benihana, a sushi bar, and a plethora of booths. It is like three restaurants in one! 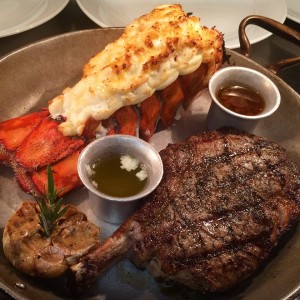 No one wanted the evening to end, as it was a great turn out with fantastic food, drinks, and music. ROKU is soon to be one of Hollywood’s newest hot spots, so don’t miss out on the delicious food and decor and make your reservation now for a lovely dinner and night out on the town! ROKU will be officially opening it’s doors to the public on Monday, November 16th, 2015.