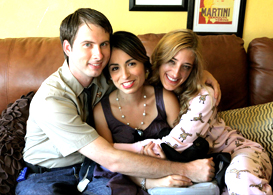 In a town where name talent and big budgets are usually what it takes to get a project made, it is always refreshing to come across content that succeeds solely because it is good and someone believed in it enough to make it happen. This is the case with OFf & RUNNING, a seven episode web series that premiered earlier this month with weekly episodes and already finds itself ona billboard in Times Square and a theater on the Paramount lot this weekend.

The series follows Leia, a bright-eyed young woman (lead actress, Emma Caltrider) in search of her ‘forever’ job. With friends Christian (Shawn Brewer) and Mars (Cheyann Montiel Reagan) by her side, the three amigos embark on a series of crazy but amazing adventures that end with valuable lessons about friends, family, and adulthood.

At a time, when following one’s dreams seems far from the minds of those in an economic recession, it’s nice to see the return of family-friendly programming with an inspirational message. Press Pass LA was able to sit down with the creator, actress Cheyan Montiel Reagan and learn how this show got… off and running!

PPLA: What made you decide to create this series and what was your inspiration for the story?

REAGAN: As a writer and filmmaker, I’ve always been inspired by Saturday Night Live and the way they use comedy to confront major social issues. After I finished my first feature script, which was a historical thriller, I knew it was time to switch gears and create a comedy show that was positive, uplifting and that even my six-year-old daughter could watch. The story of Leia’s search for her “forever” job and being hopeful for a sustainable career in this state of a recession, is why this show is so important. This show will inspire people to find their purpose in life and recapture the American Spirit.

PPLA: How did you go about casting the series?

REAGAN: I did a short film earlier this year called Coming Together and worked with a freshed-face actress, Emma Caltrider. After the film succeeded getting into the BHLIFE Film Festival, I knew we had the chemistry to create something bigger together. She was the perfect Leia for OFf & RUNNING (OAR). As for the rest of the cast, I met most of them over the course of my career. Half of the supporting cast was pulled from traditional casting sites. One young man, Sebastian Duran Lopez, was introduced to me during our school tour earlier this year. He wanted to act and did a little improv for me on the spot. He is now a featured background actor in Episode #5 and is currently attending California High School.

PPLA: How did the components of funding/crew come together to make this idea a reality?

REAGAN: We raised the funding needed for season one through a wonderful fundraiser screening we had at the Whittier Village Cinemas in July. During production, the crew came together based on availability and based on the availability of equipment borrowed from people I have worked with before. Some of our production assistants were students who expressed interest during the school tours. By the end of the season, these students got experience in areas like sound operating, script supervising, and even assistant directing.

PPLA: What do you take away from completing this project?

REAGAN: I want people to be inspired to pursue what makes them happy. Everyone has to work, nothing is free in life. But if you can work everyday of your life with a passion for what you do, the world would really be a better place. The reason I made this a quirky comedy is because I want people to recognize that mistakes happen, failure will come, and you have to laugh at yourself and not take life too seriously. Doors close, so better ones will open.

PPLA: Any advice for other filmmakers?

REAGAN: Learn your strengths in filmmaking and allow others to help you.

PPLA: Do you plan to continue the series or try to sell it to TV or turn it into a film or full length project at some point?

REAGAN: I will continue the series if the funding is available.We’ve gotten a lot of interest and I’m happily exploring my options. I love the world of OFf & RUNNING and I think the more exposure it gets, the more the world will fall in love with it, too.

PPLA: You had an ad in Times Square and are premiering at a screening on the Paramount lot this weekend. Those are big steps for a web series. How did this come about and how does that feel?

REAGAN: These amazing opportunities have come from amazing people who believe in our project! When you believe in a project as much as we do, people want to help you succeed! We have a growing support base – our “Framily” that has helped us every step of the way. I personally feel so blessed to know that these people have helped turn our dreams into reality.

The fact that this how was made on a shoe-string budget with unknown talent and has come so far already proves the show’s message- if you follow your dreams, with hard work and determination anything is possible.