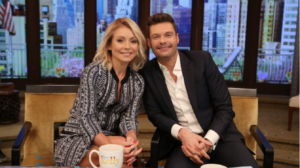 The “Seacrest” is out!

After a yearlong search for the perfect person to fill the role of Kelly Ripa’s co-host for ABC’s “Live”, Ryan Seacrest—aka the hardest-working man in show business—has officially been confirmed for the position.

“It’s always been on my radar as it’s such a terrific show, and I have been a frequent guest and co-host over the years,” Seacrest shared with Variety. “I would probably say that serious consideration was given to this over the last few months.”

So excited to join this show!! @KellyRipa crushes every morning… one of my favorite people ever #livekellyryan

After former co-host Michael Strahan suddenly announced his departure from “Live” for a new gig at “Good Morning America”, fans have speculated for months as to who would fill his spot. Countless A-List names had visited the set for a guest-host audition, including: Anderson Cooper, Neil Patrick Harris, Fred Savage, and Jimmy Kimmel to name a few.

In June 2016, the search for the next “Live” co-host was slimmed down to a list of eight contenders. Ripa was in no rush to quickly fill the slot because she wanted to ensure that she brought on the right person to sit alongside her. In considering Seacrest’s decorative past within the television hosting world, he somehow feels like the perfect person for the job.

“Today, the next chapter of the Live story is about to be written,” Ripa shared with the audience. “Today, my new co-host will officially be joining me on Live. And today is a very good day.”

Seacrest is a man that wears many hats. Since he also runs the widely popular daily radio show On Air with Ryan Seacrest in Los Angeles, it automatically raises the question of how will he be able to complete both jobs with “Live” operating in New York City (and get sleep for that matter). Luckily, Seacrest naturally has jam-packed schedule all figured out.

“I’ll be here during the week and then at the end of the week … I’ll fly back to Los Angeles and work from there,” he shared. “I have an iHeart studio here in the building, so immediately after Live on television, we go live on the radio.”

iHeartMedia, the company that provides Seacrest’s radio gig, believes this new role is a great career move for him partly because the “KIIS-FM morning show will benefit from his daily television presence.”

In addition to his ongoing radio duties and his new role as co-host for “Live”, he will also continue to serve as a correspondent and executive producer for E!’s Live from the Red Carpet. He will also remain as a host for iHeartRadio’s televised events and of the annual Dick Clark’s New Year’s Rockin’ Eve with Ryan Seacrest. Likewise, his projects under Ryan Seacrest Productions and Ryan Seacrest Enterprises—including “Keeping Up with the Kardashians” and Jennifer Lopez’s “Shades Of Blue”—will proceed as normal.

“Live with Kelly and Ryan” will air every weekday morning (check local listing for times).