Netflix’s comedy horror series, Santa Clarita Diet, stars Drew Barrymore (Sheila Hammond) and Timothy Olyphant (Joel Hammond) as married realtors, who are living a quiet life, raising their teenage daughter Abby Hammond (Liv Hewson). The family resides in Santa Clarita, Calif and are leading a seemingly normal life, until their world unexpectedly uproots when Sheila goes through a dramatic transformation that sends her down a road of death and destruction.

Joel and Sheila Hammond are your everyday suburban real estate agents in SoCal, a typical power couple. However, the couple face a series of obstacles when Sheila has a physical transformation and literally turns her into a zombie which results in her craving human flesh. Proving the power of family, Husband Joel and daughter Abby, attempt to figure out this new road bump in Shiela’s life. As a family they have to deal with keeping the secret from neighbors, navigating cultural norms, keeping Shelia’s cravings in check (as being a zombie and eating humans makes her feel surprisingly better than ever),  also getting to the bottom of a potentially mythological mystery that now plagues all their lives. 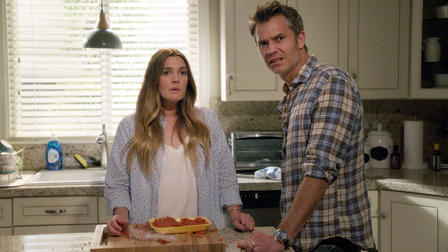 Season one, was witness to the Hammonds being introduced to this new….. factor, in all their lives. Viewers watched as the family navigated the difficulty through a series of funny scenes, heartfelt moments, lessons learned, dealing with Shelia as a flesh eating “monster.” Now, a year later, the show is back, as Netflix has released 10 new episodes for us all to binge, premiering March 23rd. The second season is said to build on the premise of the first, while exploring new territory surrounding the pressing urges of being a zombie in a human world. Drew Barrymore, Timothy Olyphant, and Liv Hewson are back for an exciting season that will surely resonate well with viewers.

Catch some quotes below from some of the actors, producers, and affiliated guests below who attended the red carpet premiere event March 21st, here in Hollywood:

PPLA: What makes season 2 fun for viewers, any different we can expect?

LH: “Season two is fun because it explores more of Shelia’s, or my mom’s, circumstance as a living zombie and I think it’ll resonate well.”

PPLA: What’re some specific ways it builds on season one?

LH: “The hammonds are back and the mystery really starts to unfold, whereas in season one it was more OMG mom’s a zombie, now its like why? I promise everyone will love it!”

PPLA: What did production look like from the producing standpoint? Are you satisfied with the results?

ET: “We put in a lot of hard work and I’m very excited to give viewers what they’ve been waiting for in season two, there will be lots of interesting and unexpected turns as each episode plays out”