SATURDAYS OFF THE 405 ARE BACK! GETTY CENTER SUMMER CONCERT SERIES

Saturdays Off the 405 offers the opportunity for attendees to enjoy music and stunning evening views from the Getty Center while featuring up-and-coming performers, along with DJ sets to open and close the night.

Saturdays Off the 405 kicks off this season on May 21 with jennylee. Best known as one-quarter of the acclaimed LA-based rockers Warpaint, Jenney Lee Lindberg’s new solo project takes her sound in a decidedly dark direction, toying with elements of ’80s goth rock interpreted with a languid, emotional edge. Within her lush soul-searching, jennylee offers a powerful, restless energy, transmitting the burning urge to dance.

On June 18, the Getty Center welcomes Moses Sumney. At just 24 years old, Sumney, who makes a unique instrument of his voice, is an artist emer 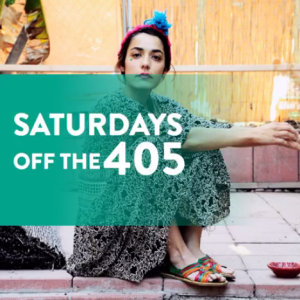 ging in a big way. By building up rhythms and beats through digitally layered and looped vocalizations, he creates a prismatic foundation for his breathy, intricately phrased singing that infuses guitar-based indie-folk with a honeyed soulfulness.

Additional dates for Saturdays Off the 405 are July 9, July 23, August 27, and September 17. Stay tuned and check getty.edu/360 for lineup announcements.

The Getty will also feature the return of Friday Flights this summer! Each session of Friday Flights brings together a variety of Los Angeles–based creative thinkers working across artistic mediums for a vibrant evening of sounds and sights. An inter-disciplinary series of happenings spanning contemporary classical music, artist-made interventions, electronic music, sound-based installations, poetry, dance, film, and more spreads out across the Getty Center from galleries to gardens.