And just like that, it was over; but not before the most epic finale we’ve seen to date. The two-part Season 8 finale of The Voice ended Tuesday evening as a star studded spectacular. If you missed it, you missed out…but we’ve got your back. 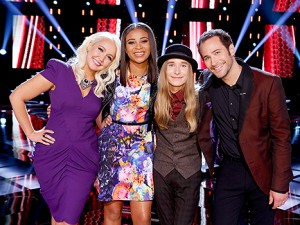 Here’s what you missed: Music favorites Ed Sheeren (and his baby pics), Kelly Clarkson, Luke Bryan, Meghan Trainor, John Fogarty, Sheryl Crow and more along with the Top 20 contestants and all of the coaches hit the Voice stage. Everything from fireworks, cages and dancers to acoustic sets that melted hearts.

Joe Jonas stopped in with pal and co-star Jeff Dye to talk about their new show coming to NBC, I Can Do That. The sneak peek was enough to convince us to tune in…hello Alan Ritchsons abs! 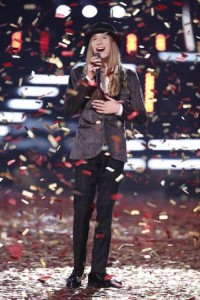 And finally the winner was announced in true suspense as the last few seconds slipped away. Koryn was named fourth, Joshua third and Meghan second runner up. America’s favorite farm boy, Sawyer Fredericks, became the Season 8 winner of The Voice.

He sang in a sea of confetti while being embraced by his beaming parents. We spoke to Sawyer exclusively after the show. He was beyond thrilled naming his favorite moments on the show as charting second on iTunes behind Taylor Swift and performing with John Fogarty. With no intentions of moving to Hollywood, Sawyer says he’s most excited to “get home to his animals.”