SAYING GOODBYE TO THE LEAGUE AT THE PALEY CENTER

Last night the cast and crew of The League came together with fans to say a fond farewell to the funny, often subversive FXX series.

The ensemble comedy revolves around a group of friends in Chicago whose obsession with fantasy football takes over every aspect of their lives. Often absurdist the show was unafraid to push the boundaries of cable TV and introduced a slew of new pop culture ideas along the way. 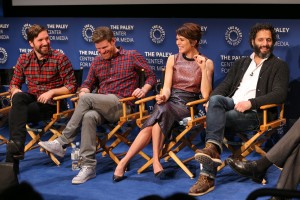 “I really grew with Jenny,” Aselton told Press Pass LA on the red carpet before the panel. “Before I started on the show I had done small independent films before this and guest starred on this but I really came into my own with this show.” Looking back on the series she admits “Winning the Shiva was really exciting and a big win for the character on the show, it was one of my favorite moments.”

“It has just hit me now that we’ve finished everything that we’re not doing this anymore that we’re going to have all of us together and it’s really sad. Because for six years we were locked in so early on, even shooting the pilot our chemistry felt really good. So it’s been like seven years of making each other laugh and I’m going to miss it a lot,” says Lajoie.

Fans were in for a treat at the Paley Center as they not only got to watch an advanced screening of the series finale but sat down with the cast for a Q&A after the show hosted by series regular Rob Huebel. Given their history and natural chemistry together it didn’t take long for the panel to turn into an extended episode of the show.

Series creator Jeff Schaffer notes that he would often let his actors go off on tangents and film it just to see what would happen. “Many times that’s what would end up on screen. Someone would say something funny and we’d end up spending an hour mining that to see what we could get from it,” he explains.

The League will leave a lasting legacy in the comedy world as one of the funniest sitcoms of the new millennium. Like Seinfeld before it the show helped launch a slew of pop culture terms and turned each of its actors into certified stars.

The series finale of The League airs tonight on FXX.