I was very intrigued when I first heard about about Sci-Fest, The first Annual Los Angeles Science Fiction One-Act Play Festival. The first of its kind, Sci-Fest brings a team of science fiction alumni together on stage, in a nice mix of one-act (short) plays.

Broken up into two different evenings, there is a Night A and Night B during the festivals May 6th – June 1st run. If you are into science fiction and theater, you’ll probably want to just go ahead and buy tickets to both nights. After seeing Night A I had so much fun I had to come back to see Night B. I was really happy I did.

I was a true 80s kid (born in 1979), and there was no better time for science fiction films than the 1980s (although the 1950s was a great era, inspiring many of the filmmakers we know and love today). Star Wars (original trilogy) was, and still is, my favorite movie(s), and the success of these three films spawned an onslaught of sci-fi movies throughout the decade.

Big budget and little budget, studio and independent, everyone was making science fiction in the 80s, and I was watching all of it. From Ridley Scott’s Blade Runner (1982) to Roger Corman’s Battle Beyond the Stars (1980), science fiction of all kinds was being made, for both the big and small screen. Star Trek: The Next Generation (1987) was on the air and I tuned in every week. Thanks to my mom, I also saw live local theater, and in the 90’s started going to the Shakespeare Theater in Washington, D.C. with our season tickets.

As a matter of fact, I was privileged enough to see Patrick Stewart (Star Trek: TNG, X-Men) live on stage performing as Othello (races reversed) at the Shakespeare Theater when I was in high school (thanks again mom!). So for me, the mesh of science fiction and stage just makes sense.

However, besides author Ray Bradbury, there has been very little science fiction actually written for the stage. Sci-Fest Producers David Dean Bottrell (True Blood, Mad Men), Lee Costello and Michael Blaha have brought together an impressive team of writers, directors, designers and actors (many of which are associated with iconic sci-fi franchises).

Here is a brief rundown of each night:

“Forwarding Adress” stars Stargate Universe alums David Blue (SGU, Ugly Betty) and Julie McNiven (SGU, Supernatural) and was quirky and funny, yet a thought provoking story on relationships and the future. “Freedom of Speech” stars James Kyson (Heroes, Justified) and is virtually a one man show about, well, freedom of speech in the future. “The Ringer” stars Sci-Fest’s own producer David Dean Bottrell and young thespian Jakob Wedel as survivors in a post apocalyptic future, trying to radio for help while held up in a small building, while something hungry waits outside the doors.

“Kaleidoscope”, the evenings centerpiece, was written by science fiction maestro Ray Bradbury, is about a group of astronauts sent floating helplessly through space after a malfunction in their ship. The story illustrates the final thoughts and conversations of the crew members as they face their death. “Kaleidoscope” is the longest one-act of the night (and is after intermission), has fantastic visual effects and has the largest cast of the evening, including Dean Haglund (X-Files) and Patricia Tallman (Babylon 5). 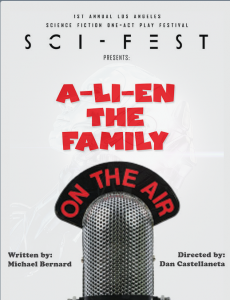 “For the Living” stars Sarah-Jane Dalby (Rake) and stage veterans Alan Polonski and Tyler Vickers, and is a morality tale on cloning loved ones.“The Wife’s Story” written by Ursula K. Le Guin (Tales From Earthsea), tells the tale of one wife’s sorrowful story of her husband’s unfortunate transformation into something unnatural.

Powerfully performed by Broadway veteran L. Scott Caldwell (Lost). “Tell Me Who You See” stars stage veterans Angela Lin, Camille Mana and West Liang, and shows us a young widow whose grief has opened a portal through to something that resembles her dead husband. This sci-fi/horror is shocking and very creepy, with simple yet extremely effective special effects.

“Smooth Landings” stars Bruno Oliver (The Office) and Lilly Holleman (The Den) and is a fun look surviving office workers after a bomb wipes out most of the world. “A-LI-EN the Family”, the evenings centerpiece, a hilarious radio play set in the 1940‘s and involves star crossed lovers (one from a distant galaxy) with a great cast including Star Trek alum Armin Shimerman (Deep Space Nine) and Tim Russ (Voyager). I had the opportunity to briefly speak with actor Tim Russ.

I asked him what drew him to being a part of Sci-Fest, he replied “I was very excited (to be involved). It’s an anthology play series based in science fiction, which has never been done before, anywhere that I know of. I wanted to be part of it. I thought this (A-LI-EN the Family) being a radio play worked with my current schedule. And I like doing radio plays(!) which are also very rare. So it’s got the rare aspect of being a radio play, but it’s also a science fiction story based and set in the 40s, and its a comedy. I thought it was an absolute kick in the pants!” Science Fiction fans in the Los Angeles area should not miss this one of a kind experience. Sci-Fest is a truly unique experience, and has been masterfully executed by a plethora of industry professionals.

Whether you want to “beam up” or clone your girlfriend, Sci-Fest offers fans a wide variety of science fiction fun, and will have you contemplating what you’ve seen for days and weeks to come. If I perfect my time machine in the next few months, I might just jump ahead and checkout Sci-Fest 2015, because I’m already excited for it. If you don’t have a time machine, do yourself a favor and go see this fantastic stage experience unlike any you’ve seen before.