Science fiction, a genre defined by imaginative content, has gone from a cult following to big business, due to the huge box office numbers driven by Star Wars, Star Trek, and the Marvel franchise films, as well as small screen favorites such as Lost, Fringe and Agents of S.H.I.E.L.D. But the ‘final frontier’ for sci-fi, theater, has been been largely untapped. 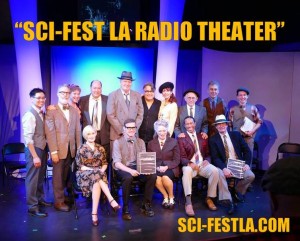 Sci-Fest LA aims to change that, with a festival of one-act science fiction plays that just wrapped its 3 week run at the Acme Theatre in Hollywood.

Few genre writers have written specifically for the stage, which makes Sci-Fest a unique outlet for both new and established science-fiction voices. Two of this year’s plays were adaptions of work by best-selling authors, Neil Gaiman and Clive Barker, while others were original creations.

The poignant “A Billion Tuesday Mornings” revolves around an autistic man and his adult daughter, and how changes to the world, both large and small, influence their relationship.

The hilarious “Access” invoked the multiverse to showcase a man breaking up with his girlfriend simultaneously in different dimensions. “Efficiency” is the oldest known science fiction play on record, having been originally produced in 1917. This predecessor to Terminator and Robocop features a wounded solider brought back to life as a cybernetic killing machine. 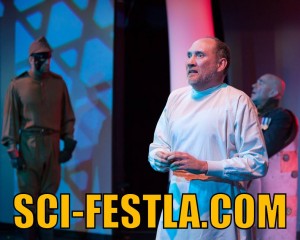 Sci-Fest is a hugely ambitious and creatively compelling festival.  It will be expanding to London later this year, and will return to LA for it’s third season in 2016.

Ticket sales alone don’t come close to covering the costs of putting on something of this scale. 2014’s Sci-Fest LA was funded by a hugely successful Kickstarter campaign that generated the festival’s entire budget, and funds were raised in part for this year’s festival via Indiegogo. To donate, or to get the latest updates on next year’s festival, visit sci-fest.com.