Score Documentary Plays Like an Orchestra in B Flat

What would you call an intangible art? Irony introduces us to the very fact that even thinking about such a notion is in itself intangible. How do you describe something that’s  non-existent in a virtual form? Oh, there are ways you can try – use of colors, images, words, and physical movements, to the use of one’s own personal voice. It’s particularly the voice, that can reach as close to tangible status as can get – still guessing? I’ll hum a few bars – MUSIC.

As the new documentary, Score points out – music’s own existence depends on wind and physics, more intangible subjects. Amazing in it’s ability to capture, control, manipulate, release, and contort the world and the way we as listeners hear it, the very creation of music is interpreted far more universal than any famous painting or poetry has ever been able to.

The above mentioned documentary, which plays an important note of credibility in the presentation of film music’s respect, also attempts to act as a conscience to the very life form that has taken upon many forms of music in the history of cinema for the past century. But it’s not as simple an objective or topic as one might pontificate.

Truth be told, there were difficult points. Nostalgia rules that you should exalt the leaders of this industry – Max Steiner, Alfred Newman, Jerry Goldsmith, and John Williams – who trail-blazed to achieving the zeitgeist or the status quo, while the main interest of the story is targeted at the components which draw us to the art of the film score in the first place. We are given some tremendous insight from some of today’s most talented and innovative film composers, from Marco Beltrami (Scream franchise, 3:10 to Yuma), Tyler Bates (Guardians of the Galaxy series), Brian Tyler (Fast and the Furious franchise), and Daft Punk (Tron: Legacy) to name a few.

There are highlights from the new legends of the medium as well, such as John Debney (Cutthroat Island, Elf, I Know what You Did Last Summer, Hocus Pocus), Thomas Newman (American Beauty, The Horse Whisperer) and Hans Zimmer (Interstellar, Thelma and Louise, Rush). There are even snippets from music theorists, film historians, film directors and musical psychologists.

What ensues is a deep study into the foray of techniques which comprise and differentiate a film as its genesis is born, to it’s final reign blesses us with interviews from prestigious directors who have directed films which have been nominated or won the Academy Award for Best Score. Included in this mix are Steven Spielberg (albeit archived), James Cameron, Garry Marshall, and more.

A true lecture in this particular tone of the filmmaking process, the narrative is spent dissecting what exactly the music does for the audience aside from how much it adds to the film. Composers offer their theories, styles, beliefs, and even some examples to better demonstrate how the process works. It’s a fascinating segment of slice of life for these professionals and should be included in college courses on the subject.

Things get muddled though when the filmmaker’s pay obvious respects around the house. Yes, the tune is a bit off key here, when too much time is spent on the obvious names that you’d expect it from (Steiner, Newman, Hermann, Williams, and Zimmer). while indignantly passing off a few of their more worthy peers (Goldsmith, Barry, and Morricone) by mere mention so as to conduct the next movement, thereby missing a few sections of the orchestra that are completely left out: Frank Waxman, Miklos Rozsa, Michel Legrand, Lalo Schifrin, David Shire, Leonard Bernstein, Alan Silvestri, Dave Grusin, Giorgio Moroder, Georges Delerue, Leonard Rosenmann, Pino Donaggio, Bruce Broughton, Ernest Gold, Elmer Bernstein, Henry Mancini, James Horner and Michael Small, many of whom were nominated or won awards for their music. 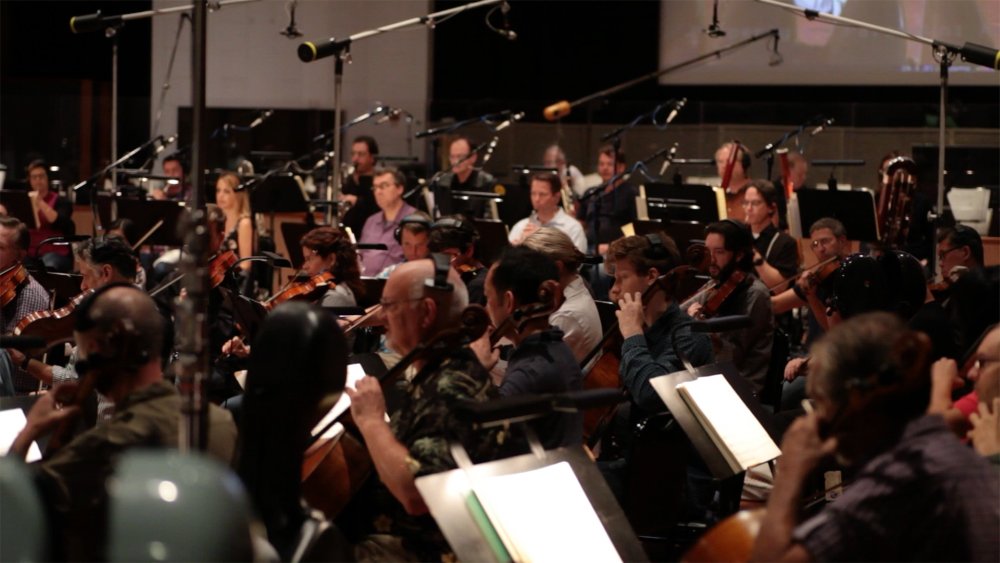 They arguably wrote iconic music parallel to that of those listed above are never even given so much as a staccato. Other modern composers who were left out range from the brilliant John Ottman, to Academy Award winner Michael Giacchino. Though it should be noted, some of their music is given a brief play, but no recognition ever transpires.

It’s easy to understand that you need to throw nostalgia in to documentaries like this to incite the most averse of audiences members, and to entice them to understanding why they love this music so much, in turn, perhaps shedding some light on who this makes them as people, given their affinities they may or may not have, which is what all great art does in some form or another.

Alas, this is handled with a sudden switch of gears, and the original intent of the documentary is lost. A better way to have handled the balance of respects and informative information would be quite similar to the blending of treble and bass sight lines on a music page. What the filmmakers have done is a half-and-half attempt, with an ineffective wrapping up in the end, leaving a very earnest yearning for that final coda.

It’s a very difficult achievement to create a great movement that will act on all tiers to affect an intrigued audience, but when it all comes down documentary filmmakers who are subjecting such magnificent figures in film history should have known better and given more of a thought as to how this would all sound.

A more suggestive form would be to do a series for Netflix or Hulu that goes through the ages of film, and the composers which defined them. Nevertheless, the one thing this documentary does is present a pitch perfect example that the interest for the subject matter is ripe, and that continuing audiences will always have an appreciation for all forms of art, even if you cannot physically see or touch it.