Living in the 21st century, it is not uncommon to see people looking down at their smartphones. Before July 6, 2016, it was assumed they were texting or watching Netflix, but now it is prevalent to see them playing the new augmented reality game, Pokémon Go.

The immediate fame of this location-based app, which melds the real and digital worlds together, was a sheer surprise to game creator company, Niantic. With daily server crashes, repeated screen freezing, and even the dreaded “three-step glitch”, it was easy to believe Niantic founder, John Hanke, when he stated that “only 10% of the game was developed and released.” Even with all of these complications, the game increased in such popularity that it set a new Apple record in the App Store for most downloads in an app’s first week of release. 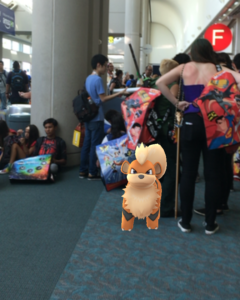 At San Diego Comic-Con, it was no surprise that people of all ages were “catching them all”; in lines, during programs, and throughout the convention center. With Go taking the country by storm, it was clear to convention organizers that the original setting of it’s developers’ panel should be moved to the infamous Hall H (which can seat 6500), instead of the originally scheduled location, Room 25ABC (which seats 480). With Hall H veteran, Chris Hardwick as moderator (after tweeting Hanke for the honor), it was clear that Pokémon Go would set another record. Never before, in the 46 years of San Diego Comic-Con history, has a game been a feature of Hall H.

A packed house was greeted with dim lights, an unnecessary number of chairs on stage, Hardwick at the podium, and Hanke sitting beside him. Quickly, players realized that this panel had little preparation, mirroring the first week of the game’s release. Hardwick even expressed that the first 10 minutes of practice, before the panel, he spent attempting to catch a Pikachu. The two dived into the diverse number of reasons why this game has captured the hearts of many; the first of which is the simplistic gameplay. If an individual encounters a Pokémon in the wild, the game will change into capture mode, and the player just needs to flick Pokéballs at it until caught.

This ease has allowed both the young and the old to engage in the festivities. Next, millennials ranging from 20- to 30-years-old, are easily attracted to nostalgia and their smartphones. This generation, more than any other, often asks for continuations or remakes of old, beloved shows and movies, to recapture the magic they knew as children. Utilizing the original 151 Pokémon created by Satoshi Tajiri (the ones the millennials remember), encapsulates the sentimentality, and adding these cherished monsters to an app for mobile devices breeds instant success. Lastly, because the game involves interaction with the real world, players are more visible to one another. They learn new Easter eggs, special throws, and where rare Pokémon maybe lurking about, creating a connective synergy to their gameplay.

Fans, however, were restless to learn if this panel would release rare Pokémon, a common gift often shared at many of Nintendo’s Pokémon-centered special events. Shouts of “We want Mewtwo!” and “Where’s my legendary?” could be heard throughout the hall. Eventually Hanke had to address that, “No, there are no special Pokemon at the panel today.” This was another example of the company finding themselves shocked by the magnitude of expectation placed upon them. Even Hardwick admitted to tweeting anger when game play was difficult, and after viewing the dejected fans’ responses, he correlated the experience to how he is treated after The Walking Dead episodes (repeatedly, he exclaimed that he did not know who Negan killed).

The crowd was not met unrewarded, however. Hanke provided the photos and names of the game’s team leaders: Candela for Team Valor, Blanche for Team Mystic (Hardwick is on this team), and Spark for Team Instinct (Hanke is on this team). Before, they were simply nameless silhouettes. Fans were also astonished to learn that there were Easter eggs that had not been discovered yet (the Eevee brother evolution one was confirmed). With only one tenth of installation completed, players also learned that trading Pokémon, customizing Pokéstops, and more species of Pokémon are in the works. The panel ended with leniency from the devotees after Hanke emphasized that, for now, he and his team’s primary concern is server stability for uninterrupted game play.