SDCC 2016: THE PSYCHOLOGY OF THE MARVEL UNIVERSE

For the most Marvel-centric fanatic, 2016 San Diego Comic-Con was the place to be! With the unveiling of a one ton 13 ft tall bronze statue of Captain America, celebrating the milestone of his 75th year, Marvel made their presence known. Dominating the Comic-Con, they included various exclusives, an interactive booth, and daily panels, which were dedicated to the Marvel comic books, TV shows, and movies.

Among so much Marvel mania, fans often miss out on off-the-beaten-path experiences, such as smaller panels in the various meeting rooms throughout the San Diego Convention Center (due note “Hall-H or Bust” coalitions, these rooms are even smaller than Ballroom 20).

One such gem, The Psychology of The Marvel TV Universe, tackled what connects vastly diverse characters from different parts of the world, distant decades, and alternate dimensions. Joined in the panel were dynamic writers, Craig Titley (Agents of S.H.I.E.L.D.), Lindsey Allen (Agent Carter), Christos Gage (Daredevil), and Scott Reynolds (Jessica Jones). Psychologist, TV mental health consultant, and creator of the podcast, The Arkham Sessions, Dr. Andrea Letamendi, offered clinical explanation of the discourse that takes place in Marvel’s TV Universe. She was accompanied with panel moderator and co-star of her podcast, Brian Ward. 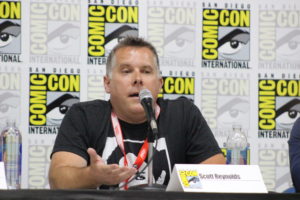 Scott Reynolds gets into the mind of a superhero.

Quickly, the intimate crowd of 300 learned that, differing from Marvel movies, were the darker themes portrayed in hit Marvel TV shows. Themes of suffering, adversity, and self doubt plagued these heroes. Dr. Letamendi explained how these characters and the people they love, often face such severe trauma that their worldviews are altered. One good example is Karen Page, the justice seeking reporter in Marvel’s Daredevil on Netflix. She survived the witnessing of a murder, many assaults from different villains, and repeated kidnap attempts. The audience found these chronic traumas changed Karen’s beliefs from “the world is innately good” to “any action is the right action if it keeps me safe”. This once timid girl now seeks and even embraces danger, rather than shying away from it.

Fans questioned the panel on whether characters on these TV shows held any mental health issues. Dr. Letamendi and writer Scott Reynolds agreed that private eye of Alias, Jessica Jones, with superhuman strength and a snarky attitude, suffered from traits commonly associated with Post Traumatic Stress Disorder, or PTSD. She survived the loss of her family in a car accident, as well as, daily mind control and repeated sexual assaults from Kilgrave, the series’ supernaturally delusional villain.

The audience witnesses Jessica’s flashbacks, one of which transported her to the horrific moment when she murdered Luke Cage’s wife, while under the control of Kilgrave. Jessica is seen reciting the street names around her childhood home, as a grounding technique, a coping skill she learned from a previous therapist. Throughout the series she abuses alcohol, a common self-destructive comfort behavior sought out by individuals suffering with immense guilt from PTSD.

Exploring the dramatic psychology of the Marvel TV Universe, it is key to see that the common thread for these characters are self discovery through disaster. The motivations for these protagonists appear to be their immense love for their social supports and forging teams (a nod to the future Defenders) that develop a wish fulfillment of family. The value of these bonds, creating validation and connection, motivate these protectors to continue to push through their pain. In the world of psychology, the best predictor of resilience is an individual’s support system.