SDCC 2017: IT’S A FAN THING TAKES OVER THE GASLAMP

During the pop-culture extravaganza that is San Diego Comic-Con, veteran guests have grown accustomed to expecting various off-site company promotions. Most include free swag, but often miss the mark on memorability, causing many to skip them all-together.

I found that this was not the case for Syfy, who took over the Gaslamp with “It’s A Fan Thing” during SDCC 2017. Shifting from swag to activations to events, it’s clear to see that the marketing team put out all the stops, which also helped commemorate the network’s 25th anniversary. Any attendee who was willing to boldly go where no badge holder has gone before (out of the convention hall), was certainly satisfied with the results.

Throughout the four day event, spanning from July 20 to July 23, 2017 the Syfy Street Team passed out swag that went the extra mile with customization, such as “Hail Hydra-tion” water bottles. I kept mine for the sheer punninness. Heading to the streets was the Syfy Drumline marching around playing music that commemorated major moments in science fiction history through the tunes of their theme songs.  Also sprinkled throughout the sidewalks were Cospital Carts, where the defeated cosplayer could get touch-up makeup from a beauty expert, as well as pursue essentials to give their costumes some much needed TLC. 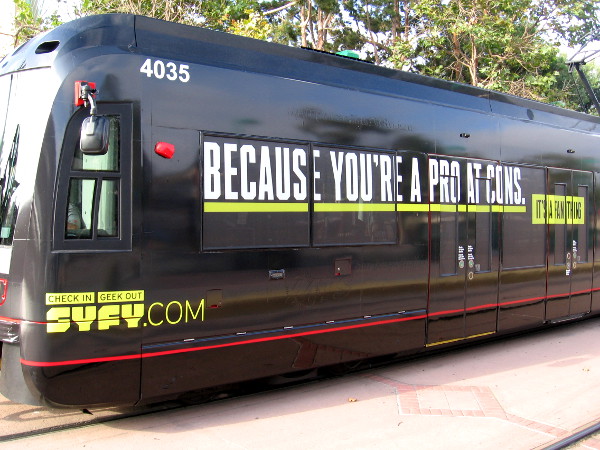 As expected, there were Syfy fan parties, but unlike previous years, the company helped strip away the exclusivity of these comic-con traditions. On Thursday and Friday night, July 20 and 22, they hosted parties at the Children’s Museum. Instead of waiting in line for special wristbands, or a “need to be on the guest list” experience, they let everyone in on a first come first serve bases. Their parties featured themed photo booths, live performances, and hourly prize drawings.

Roaming the stress of San Diego were the Trivia Trolleys: pedal-powered canipa style mobiles that tested two teams of six from a large range of pop culture, history, and science questions. Anyone who truly wanted to show-off their geek knowledge was able to jump aboard and compete to win prize money and giveaways. I love trivia shows, especially Cash Cab, so the chance to join a bike version seemed like a no-brainer. My father was with me when we discovered a stop, and hopped aboard. The two of us dominated the questions, what we weren’t ready for was all the biking. I’m rather short and couldn’t pedal a full rotation! The volunteers also enjoyed watching everyone struggle as they road uphill, a workout no one was prepared for.

Not to be out-done by the Trivia Trolleys, Cosplay Karaoke buses roamed the roads inviting all the fandom dressed to belt it out to their favorite songs. As it drove by, people on the streets would join in on the fun by singing along. At one point the music migration passed by the convention center, and we all stopped in the walkway to take part in Shout, a seminal classic by Otis day & The Knights that was featured in the popular 1978 movie Animal House. The open-air double decker bus was so popular, that even the stars of Syfy’s The Magicians dropped into sing. Arjun Gupta serenaded the crowd with a passionate rendition of “Hero” by Enrique Iglesias. Leaning more towards a duo act, Hale Appleman and Summer Bishil gushed during a duet of “Total Eclipse of the Heart” by Bonnie Tyler.

One of the most memorable and unique experiences, however, was the Geek Love Chapel. It’s said that there is only one commitment greater than fandom, and that’s marriage. Therefore Syfy allowed nerds from all-corners of the multiverse to volunteer as tribute in the nuptial-giving. The pop-up ceremony space came complete with greenery, benches for guests, wedding accessories like veils, and nerd essentials like lightsabers. Surrounded with loved-ones and the Syfy crew, fans renewed vows, or uttered them for the first time. Even better, American Gods star Orlando Jones officiated each wedding, all legal as the actor got ordained by the Universal Life Church. Actor Ian Ziering, star of the popular Sharknado franchise surprised his wife in a whirlwind vow-renewal.

Back at the convention hall there were thirteen Syfy panels, two screenings, a live-broadcast with around the clock convention coverage, and an invitation only The Nerd Party with co-host Zachary Levi of Nerd HQ. In the end, it appears the organization practices what they preach. Everything off and on-site was fan-centric. Tailoring their investments towards trivia, cosplay care, pun-filled freebies, and a chance at geek-matrimony shows they know their audience. Syfy  truly embodied “it’s a fan thing” at San Diego Comic-Con 2017.