The cast of American Horror Story: Hotel and Scream Queens along with creator Ryan Murphy, joined forces this weekend at Comic-Con and together created one pretty fantastic panel.

As many of you know, Murphy has become a TV modern day “king of horror,” and started off the panel discussing his new show, Scream Queens. The show probably has one of the best casts to ever hit the small screen, and a good chunk of them were at the panel alongside Murphy. Stars Jamie Lee Curtis, Emma Roberts, Lea Michele, Skyler Samuels, Abigail Breslin, Keke Palmer and Billie Lourde all sat side by side talking about the soon to be hit. Some of the other cast members not present include Ariana Grande, Nick Jonas, Oilver Hudson, Diego Boneta and more. 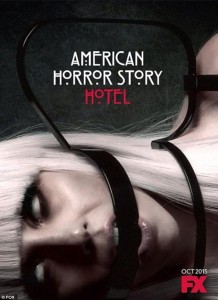 The “Halloween meets Heathers” premise of the series not only has fans excited, but the cast members as well. American Horror Story alum Emma Roberts was in love with the idea of the show from the moment Murphy pitched it to her, as well as her character Chanel. However Glee star Lea Michele didn’t know as much when accepting the role of Hester. Michele said, “Well, I didn’t really know anything going into it, Ryan called me back in October when we were starting the last season of Glee and said, ‘New show, Jamie Lee Curtis, Emma Roberts, neck brace, are you in?’ And I was like I would do anything with Ryan, but obviously it is very different. “

While Murphy got his dream cast, he said he would not have done the show without Jamie Lee Curtis, the Halloween alum.”Yes, if you’re going to hire Jamie Lee Curtis, you want to see her kicking ass and fighting back and doing all of those things that you loved her doing, so we’re writing a scene right now where she’s fighting three killers,” said Murphy. “I come at the stuff from a real fanboy place.”

One of the most interesting parts about the Scream Queens panel was that none of the actors know who the killer is at the end. In fact, Murphy had each actor tape scenes where they were directed “to be the killer.” No spoilers here! Murphy also explained the difference between American Horror Story and Scream Queens in that first of all, it is going to be a horror show for network, not cable television. In addition the show is not going to be like AHS that has different characters each season played by some of the same actors.

The setting will change, however the characters that were able to stay alive until the finale will be in the next season, not just the actors playing other characters. While most of the panel discussed Scream Queens and the last season of American Horror Story, the audience got a very small taste of the new series of AHS: Hotel as well.

New series regular Matthew Bomer, along with alums Evan Peters, Sarah Paulson, Kathy Bates and Angela Bassett were all in attendance. Murphy said that he feels the vibe of this season reminds him more of season one and three, which is great news as they are two of the fan favorites of the series. Murphy also briefly discussed Lady Gaga’s part in the show, which is definitely going to be creepy, and thats literally all we know. It has been known for some time now that Murphy likes to keep tight lipped about his projects, and that is still very true. However the American Horror Story: Hotel and Scream Queens panel at Comic Con gave us just enough to come back wanting more in the fall!