If you attended Comic-Con this weekend, you may have encountered a squad of intimidating-looking soldiers sporting red berets marching around the grounds or spotted a few Uber SUVs emblazoned with a cryptic advertisement for an upcoming USA Network drama entitled Colony.

Those hoping for answers during Friday’s jam-packed panel for the upcoming series were only provided more questions. This shroud of mystery surrounding the show makes sense considering that this is the latest project from Lost executive producer Carlton Cuse. 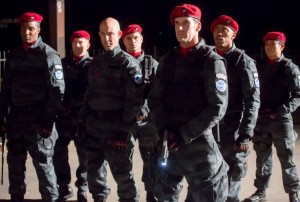 The long-running sci-fi/supernatural series is still an enigma five years after it went off the air. Colony is set in modern-day Los Angeles. The city is occupied by as Cuse called it, “a mysterious invading force.” Our favorite Lostie, the island’s resident bad boy, Josh Holloway stars as a secret agent trying to get 12-year-old son back after losing him during the invasion.

Panel attendees were treated to the first 11 minutes of pilot and a Q&A session where Cuse was asked about the infamous Lost series finale by Nestor Carbonell, who played the heavily-eyelined immortal Other, Richard Alpert on the show. “Were they all dead?” Carbonell inquired as the audience broke out in massive applause. “No, they were all alive and had a nice time and they all die at the end,” an exasperated Cuse responded. In a perfectly executed gag, Carbonell was then escorted out of the room by the Colony guards.

Be sure to check out Colony premiering this fall on USA.