SECRET IN THEIR EYES: JULIA ROBERTS LIKE YOU’VE NEVER SEEN HER BEFORE

I’ve always been a Julia Roberts fan but “Secret in Their Eyes” isn’t your typical Roberts movie. It’s quite possibly her strongest role to date, at least since her turn as Erin Brockovich, a role that earned her an Academy Award and garnered a Best Picture nod. Something tells me Oscar could again be calling her name.

Secret in Their Eyes is based on the 2010 Argentine film that won an Oscar for Best Foreign Film (2010). That said, the film feels like an entirely new movie and could easily stand on its own.

The original film titled “The Secret in Their Eyes” is set in Buenos Aires and revolved around a brutal 1974 rape-murder investigation that is re-opened 25 years later amid the backdrop of political turmoil. The current film takes place in Los Angeles in 2002, post 9/11, in a time when questionable police ethics in the name of national security could be deemed reasonable. This film follows a 13-year time jump and alters the dynamic of the victim story from husband and wife to mother and daughter. 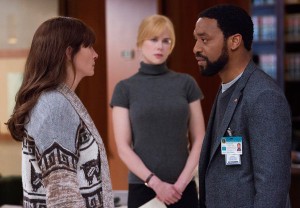 ) and Jess (Julia Roberts) and their district attorney supervisor Claire (Nicole Kidman). During surveillance of a nearby mosque, a body of a teenage girl turns up brutally murdered. The girl turns out to be none other than Julia Roberts own daughter. Thirteen years later, after obsessively searching for the elusive killer, Ray uncovers a new lead and he returns to try to permanently resolve the case and the relationships that were left in a tail spin.

The film opens with Roberts as an eager FBI investigator with a thrill for her job, a bigger than life love for her daughter, and her playful smile that audiences everywhere have come to love. Within a few short scenes we are left with a grief-stricken shell of this women and Roberts transitions perfectly. She plays a women who would do anything for one more moment with her daughter as if she had lost her own child, while equally driving home how dangerous a glimmer of hope can be for someone in a case long thought cold. 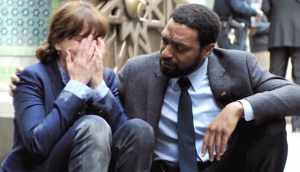 Ejiofor and Kidman have palpable chemistry throughout the film. Though not overt in their dialogue, their onscreen connection leaves the audience feeling the burn of their desire for each other.

Their are two scenes that set this film apart for me. The scene where Ejiofor reveals to Roberts that the dumpster contains her daughter’s body and the aftermath of that moment, and the scene where Ejiofor and Kidman question her daughter’s killer. Luckily, the screening I attended included a Q & A with Director Billy Ray and Producer Jeremiah Samuels which shed light on both these moments.

Billy Ray revealed that it was his decision to keep Roberts away from Zoe Graham (the actress who played her daughter) the entire day until the moment of the reveal in the dumpster. “It was Roberts idea to be wearing those latex gloves when she jumped into the dumpster so that she would have to take them off to hold her daughter,” Ray said, the choice that made that scene oh so poignant. He commended Roberts as the type of actress you want on set because she is collaborative and makes suggestions like that which really elevate the scene. He also spoke about the tight production schedule and Roberts willingness to dive in and shoot multiple pages for long hours, despite her A -list status.   Ray went on to discuss the high level of work of Kidman and Ejiofor and how he knew the second they got on screen together the audience would be sucked into their love story. 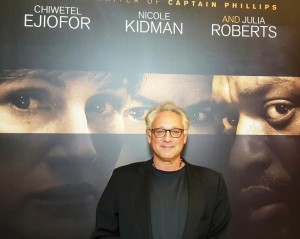 Before leaving, Executive Producer John Ufland highlighted this particular advance screening and Director Q & A  was benefitting a very worth cause, one that is close to his own heart and family, Saving Teens. He spoke about the struggles and triumphs his own daughter had faced. Saving Teens works with health organizations, educational consultants, wilderness programs, boarding schools, rehabilitation centers and educational lawyers to fund and support families with financial limitations as they complete the comprehensive programs they need but might not otherwise be able to afford. Executive Producer Jeremiah Samuels (“Dear John,” “Conspirator,” “Brothers”) was also in attendance to support his film and the charity.

A great movie, a great cause, and a great evening.