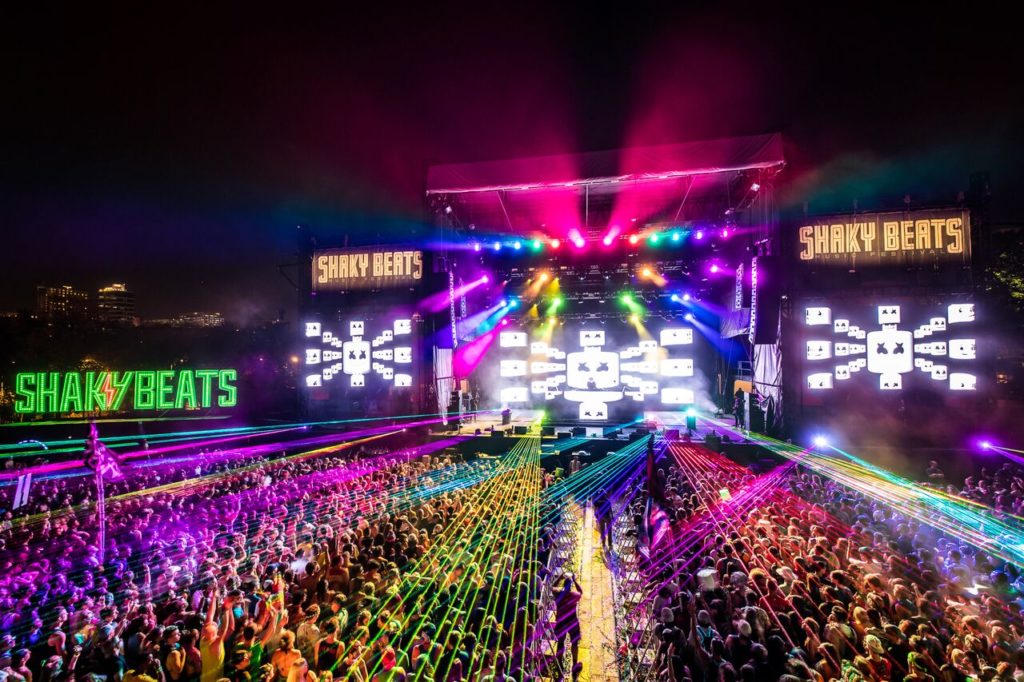 Despite any sort of official parking lot, travel to the festival was made convenient thanks to the MARTA subway, numerous Uber and Lyft pickup locations and an abundance of daily parking areas nearby.  Food trucks filled the festival grounds but there were also many highly rated restaurants in the area offering a variety of meals from Asian Fusion to Soul Food.  Those who are used to camping may have been disappointed that none was available, but with many hotels and AirBnB hosts nearby finding a spot to rest your weary (and likely spinning) head was not an issue.
Friday kicked things off for the weekend with a great performance from Lost Seekers at the Ponce de Leon stage, the only covered stage of the four in the park.  Hometown superstar Ludacris performed billboard topping hits one after another as the sun set behind the main Peachtree stage, creating a beautiful skyline vista from whence the rapper/actor challenged the crowd to party with him.  Dillon Francis took to the Piedmont stage on the heels of Ludacris, combining his pension for moombahton music and comedic visuals to entertain the crowd for an hour.  Closing out the evening was Marshmello, one of the biggest booming DJs of the last two years. In 2016 he played one of the first shows at Shaky Beats and has since worked his way into a headlining role with hits such as “Alone”, “Silence”, and “Chasing Colors”.  Ego has not overtaken this marshmallow masked musician, his joy and youthful exuberance are abundantly clear from the dancing he does to the visuals he puts on both behind him and on his mask. 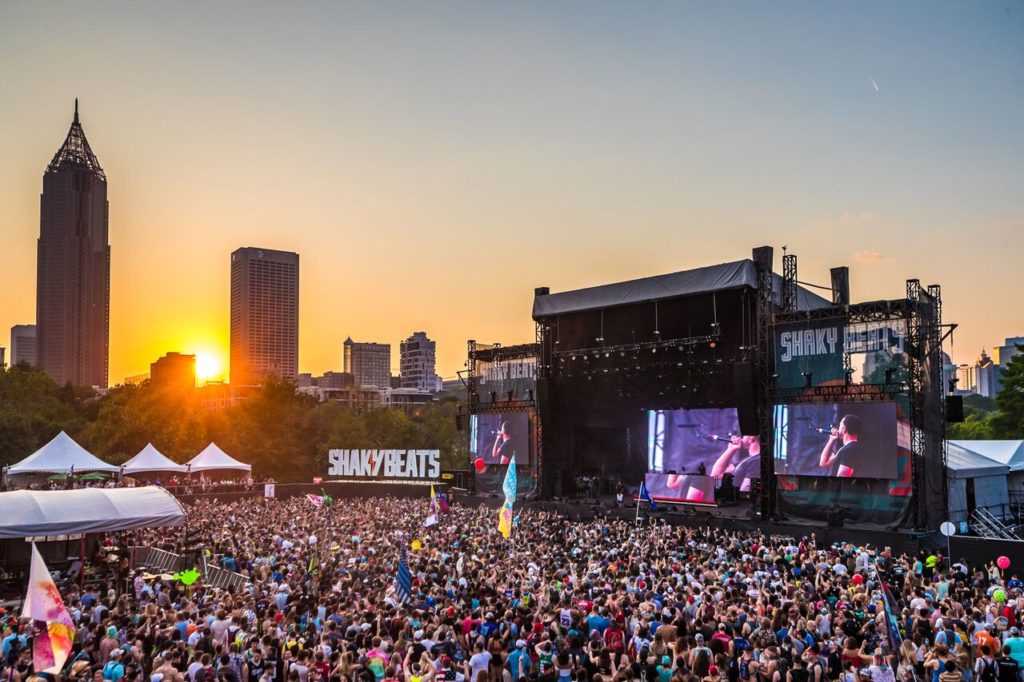 Saturday offered a full slate of artists featuring a potpourri of musical styles.  Atlanta’s own Playboi Carti brought his experimental, hook-heavy rap style to a fervent crowd that has watched him rise to superstardom before legally being able to drink.  Borgore and Excision brought heavy dub influences to their sets (perfect for the headbangers) while Ookay and Bonnie x Clyde performed live vocals to more pop-inspired tracks.  Shiba San had the crowd dancing to his French hip-hop trance music, as did Phantoms with their out-of-the-box multi genre spanning sounds performed live on drum pads, synthesizers and midi controllers.  All of these lead up to an incredible performance from one of the world’s biggest DJs in Zedd.  Combining multiple genres of music Zedd has come a long way from the four year old taking classical piano lessons he once was.  Born in Russia and raised in Germany, Zedd has gone from the piano, to a rock group with his brother at twelve, to international phenom by age twenty-three.  Performing on a raised stage that put him right in the center of the visuals behind him, Zedd rolled out pop hit after hit like “The Middle”, “Stay”, and “Beautiful Now” with remixes of “Rude” and “The Time” cycled in with his more dub-heavy beats.  The most touching moment of his performance was his tribute to Avicii with the song “Levels.” 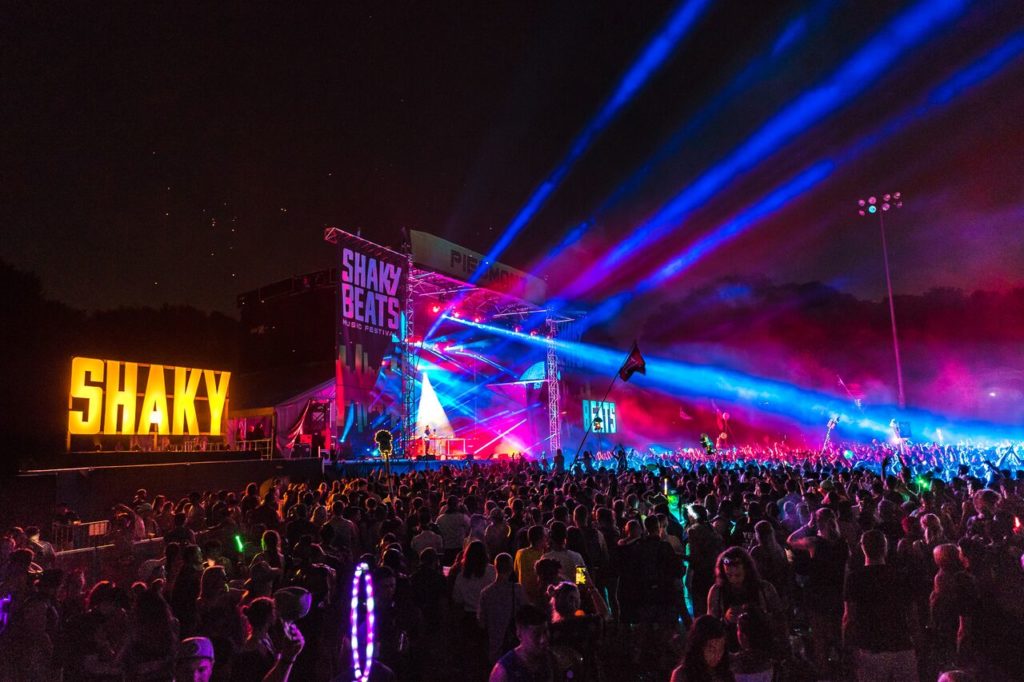 Sunday afternoon proved to be a great time for up and coming artists to spread their wings and make new fans. DJs Medasin and Dr. Fresch as well as rapper Troyboi all put on solid performances to get the crowd vibing properly.  Unfortunately Louis the Child and Autograf had overlapping sets, both groups are young and full of talent.  Autograf features the same kind of future music sound as Phantoms while Louis the Child features a similar future bass sound with more of a collaborative pop sound to their lyrics.  Both groups will become, if they’re not already, household names with sought after tours.  Seven Lions was the penultimate act of the main stages and he did not disappoint, using a combination of ethereal trance vibes and intense bass to get the crowd dancing and ready for the closer, the one and only, Kygo.  A norwegian-born producer, songwriter, and DJ, Kygo has risen to world renowned phenom in unprecedented time.  His debut album, Cloud Nine, released at #1 on iTunes Dance Albums Chart and featured hits “Firestone” and “Stole the Show” among many others.  Seeing Kygo live is an experience unlike any other in EDM, he opened with “Stole the Show” and brought out Parson James to do the vocals live as he does on the recording.  This became a theme throughout the night as he brought out five more guest singers to perform their tracks live with him.  As always though what makes Kygo so unique is his ability to use electronic music to create beautiful melodic sounds that transcend age, race, and gender and combine them with lyrics that tug on the heart strings.  Music is a shared experience and there wasn’t a soul present who didn’t get swept away in Kygo’s good vibes.  The most impressive moment was his final song, where he came down from the soundboard and took a seat at an until-then hidden piano to perform an acoustic version of “Firestone” with Conrad Sewell on vocals.  A perfect end to a perfect weekend.