Shameless, for all the wonderful wretchedness of the Gallaghers and company, has spent a lot of time building the resourceful and responsible Fiona (Emmy Rossum, and the true lead of this show) to be the foil of the heinous drunken lovable user Frank (William H. Macy, not the lead).
The dynamic blossomed, Rossum did magnificent work making it work for the poverty stricken clan, and Macy did what he could to dismantle that so long as it served his needs. Her Seinfeld to his Kramer.
But then imagine if Jerry suddenly turns into a piece of shit. Let’s say Jerry met some fellow comic, a bad influence, say like a Lenny Bruce/ Diceman combo of lechery and self-destruction or something and Jerry doesn’t like the guy. He in fact seems to hate what this guy represents, but for some reason Jerry completely falls into this dude’s downward spiral. It would be ridiculous, to turn the straight man, the glue, into the wild card.
And that, through this clunky metaphor, is what ‘Shameless’ has done this past season with the venerable Fiona. At the beginning of this season, she had a full-time job with benefits and a nice-guy albeit boring boyfriend for a boss. All was well until the boyfriend’s ne’er do well brother Robbie comes into the picture. He’s a recovering drunk and druggie, completely full of shit, oh, and apparently he has a Spectacular Penis of Alluring Magic (SPAM) that Fiona simply cannot resist and nearly immediately cheats on her boyfriend with him.

This takes Fiona into her own downward spiral, which goes from breakup, to nearly killing her youngest brother with a cocaine overdose, to an arrest and conviction, job loss, ankle monitor, breaking parole for more SPAM and ending up back in jail. Why? Were the writers trying to clarify the nutty point that former Arkansas Governor Mike Huckabee made about women “needing” the government’s help to control their libido? Was she simply helpless to the all-powerful SPAM? 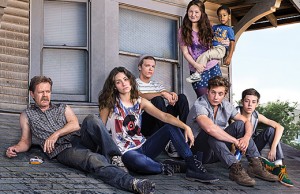 I realize that conflict is essential to make things happen, and sure the whole safe job/safe boyfriend couldn’t last, but the showrunners did a real disservice to a strong character. Perhaps she will come out of this clean on the other side, but a strong viable woman was hijacked by Gallagher vices that she had eluded to this point. Now she just seems a ticking timebomb of naturalistic hari-kari who could either sink or soar. Speaking of ebbs and flows, schizophrenia was a big theme this season, especially at the end when we discover that ‘Orange Boy’ Ian is perhaps schizophrenic himself. Fitting for a show that has been preparing us for the last few seasons thematically with manic highs followed immediately by soul-crushing lows. One moment is a celebration, the next a child is fighting for his life after ingesting about a gram of cocaine. One moment Lip is being comically chased by an angry boyfriend, the next we see the horrific results of domestic abuse. One moment we are reveling in the coming out party of my new favorite gay couple of Mickey and Ian replete with a bar fight, and then the next moment Ian is so depressed he cannot get out of bed, another victim of those unavoidable Gallagher genetics.

The saving grace for this season was the rest of the Gallagher clan. Carl discovered love and masturbation, then discovered that they can be mutually exclusive when he met the equally delinquent Bonnie. Lip is surviving college with the help of a new sugar momma who just wants to infuriate her parents. Then there’s Frank. Who spent most of this season splayed out more than usual thanks to a failing liver that he spent the entire season trying to get transplanted. Here was another ebb and flow when he found a black market doctor to do the transplant but instead the shady doc took one of Frank’s kidneys.

Our last image from this season was Frank, who after surviving an actual legitimate liver transplant and a bit of a coma, managed to get Carl to wheel him out to Lake Michigan where he takes a savory first new liver drink and defiantly calls out to God asking ‘Is that all you got!…I’m still here,’ before handing the bottle to Carl, setting him along the same path that led Frank to that end. The Gallagher seppuku will continue, no fighting your nature, I guess.