“It’s an astonishing film,” says Oscar nominee and Golden Globe winner Sharon Stone about Kurmanjan Datka Queen of the Mountains at a VIP reception and screening she hosted at the Egyptian Theatre in Hollywood. 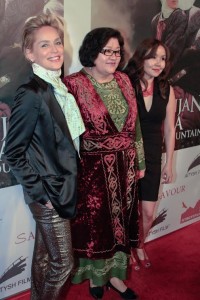 “It is a miraculously well made film. It is an epic film. It is a true story. It is beautifully acted. The costumes are astoundingly beautiful and the cinematography is at a level that’s amazing. It’s produced by a woman and it’s a story about a woman in an incredibly oppressed environment who believed in her destiny to the point of standing in her courage and changed a nation because of it. It’s an amazing film. Honestly, I can’t say enough about this film. It has impacted me so profoundly and I’m so proud to have an opportunity to talk about it. It’s just an amazingly beautiful film.”

Stone hosted the red carpet reception and screening for Kurmanjan Datka Queen of the Mountains, Kyrgyzstan’s submission to the 87th Academy Awards for Best Foreign Language Film. Filmed on location amid the rugged terrain of Kyrgyztan, epic battles are fought, first to unite the forty tribes of the Kyrgyz people, then to confront the imperial forces of the Russian Empire. It would take a formidable woman to oversee such dangerous missions. However, any questions as to the power of Kurmanjan Datka’s character are resolved early on in the movie during an especially harrowing scene. One where she makes her way through a crowd that has gathered to stone a young woman to death for adultery and brings water and comfort to the condemned woman.

Dignitaries from the Kyrgyz embassy, celebrities, as well as the film’s director, producer and star came out to support the movie about a woman honored for saving the nation of Kyrgyzstan through diplomacy more than a century ago at a devastating cost to herself and during a time when female world leaders were as rare as they were desperately needed. “I would say that the world is supported by women and it does not matter which century it is because all the time, the world depends on women,” says the film’s producer Zhyldyzkan Dzholdoshova, speaking through an interpreter. “Thanks to Kurmanjan Datka the heroine of the film, at the end of the 18th century and the beginning of the 19th century, our country was able to survive. Kurmanjan Datka was so independent and so strong. It was a really difficult time. Kyrgyz people live in a mountainous area. It’s not easy to live in such circumstances and in such an environment. Moreover, at that time, it was kind of a tough neighborhood. We had the Russian empire from one side, China, and some pressure from England. Despite all these difficulties, she was able to preserve the country and save the nation. It turned out to be history that she had to make a tough choice between her son and the country. She made a choice in favor of the country and that’s why she’s a great woman and why we are proud of her.”

The film’s director Sadyk Sher-Niyaz was on hand to speak about the personal impact of bringing such an esteemed personage to the big screen. “This woman is really important in the history of our nation,” says Sher-Niyaz through an interpreter. “That is why it’s a great honor for any director in our country to have a film about her.” The life story of Kurmanjan Datka greatly impressed Twelve Years a Slave actress Kelsey Scott who walked the red carpet to show her support. “I am driven to films that continue the discussion of women’s stories,” says Scott. “I think that we don’t get enough of it so when there’s one that opens the doors to us to speak our truth, that’s something I show up for.” 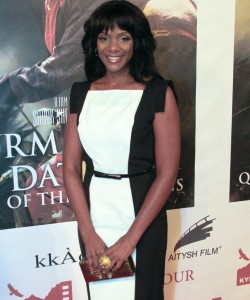 Guests attending the reception and screening included Elina Abai Kyzy, who portrays Kurmanjan in her younger years, associate producers Brett Syson and Asel Sherniyazova, Madison McKinley from The Wolf of Wall Street, Ambassador Muktar Djumaliev and First Secretary Zhanybeck Eraliev of Kyrgyz Republic to US and Canada, the Honorary Consulate of Kazakhstan in Los Angeles, Gaukhar Noortas, members of AMPAS and the Hollywood Foreign Press Association.