“The special is its own thing,” the showrunner told EW at South by Southwest on yesterday. “We wouldn’t have done the story we’re doing, and the way we’re doing it, if we didn’t have this special. It’s not part of the run of three episodes. So we had this to do it — as we could hardly conceal — it’s Victorian. [Co-creator Mark Gatiss] and me, we wanted to do this, but it had to be a special, it had to be [a] separate entity on its own. It’s kind of in its own little bubble.”

This works as a great way to not only satisfy fans, who still have to wait at least a year until the new season begins. Though no air date is set as of yet since it is a Christmas special it should debut sometime in December. On the plus side fans of Moffat and Gatiss will now have two Christmas specials to look forward to during the holidys since the annual Doctor Who special is expected to air around the same time. 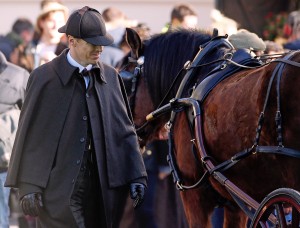 Benedict Cumberbatch will portray the classic version of Sherlock Holmes.