Shin Godzilla Mines New Territory for the King of the Monsters

Shin Godzilla hits American theaters for one week only and really brings the King of the Monsters back to its roots.
Marking the first official reboot of Godzilla since 1985, Toho’s new Shin Godzilla is descending on American theaters for one week only. For those that don’t know Toho created Godzilla all the way back in 1954 and has made sure the creature stays in good hands. While it’s true they had a part in making the new Legendary Picture’s  Godzilla movie here in America that one still feels very westernized compared with its previous incarnations. 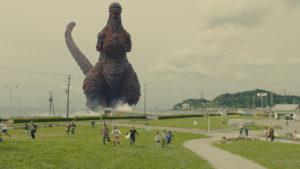 Godzilla returns to Tokyo in the first reboot of the monster since 1985.

The movie also marks the 30th Godzilla film in 60 years, so it had rather big shoes to fill from the very beginning. That may be why, instead of taking the more conventional monster destroys the city route, the film aimed for hard hitting political satire instead. Shin Godzilla may share more in common with George Romero’s Dawn of the Dead than any other monster movie. While Godzilla is without a doubt a fearsome foe throughout the movie it is the humans and how they respond to his presence that really matters.

Instead of going full-on weird like most kaiju films Shin Godzilla keeps its focus tight on the Japanese government and its response team. The first half hour plays almost like Doctor Strangelove as it explores the endless red tape of bureaucracy. Every small action deserves a press conference and four levels of approval. Half the city gets destroyed while politicians must sort through legal documents finding the best response to a large, unidentified monster leave a path of destruction in its wake.

Godzilla almost becomes secondary, which actually kind of works. By now audiences know the routine so letting him do his thing in the background is somehow more effective. When he finally does let loose though it is hard not to get giddy. Toho has really upped the ante on just how powerful this new Godzilla can be. He no longer needs to stomp on a building to destroy it, his very presence and the radiation he emits causes serious damage.

At one point he actually remains immobile for over two weeks in the middle of the city while the rest of the world prepares for him to reawaken. This allows the film to take a breather from the destruction and break down not just his science but the overall worldwide impact a huge kaiju would have. All of it is surprisingly grounded and feels more like VEEP at times than a monster movie.  It is kind of refreshing.

The best science fiction and horror uses the medium as a lens of looking at the world today. George Romero’s zombies are the perfect embodiment of that. Watching humanity plunge into the apocalypse gave us a good luck at everything from politics and racial tension to lessons in consumerism. That fact that Toho is taking that route is exciting and paves the way for some truly unique sequels that are sure to arrive in the next couple of years. Welcome to the new era of Godzilla.

Shin Godzilla is playing at select theaters nationwide from Oct.11-16, 2016.