Showtime’s hit series Shameless has welcomed fresh meat to it’s eclectic cast for the 4th season of the provocative comedy. The very lucky actor whose life is sure to change after his television debut? Former basketball body double Sheldon Bailey!

The 29 year old actor will portray Kenyatta on the hit show, who will be the new love interest of Mandy Milkovich (played by Emma Greenwell) later this season. And if you’re a fan of the show like we are, you know there is bound to be all sorts of drama in the Milkovich household once Emma brings home a new guy – and we absolutely can’t wait!

Standing nearly 6’6 tall with an all-star basketball background (NCAA scholarship/top 30 nationwide ranking), Sheldon got his start as one of the industry’s top athlete body doubles. After starring in over 40 national commercials as portraying athletic superstars LeBron James, Kobe Bryant, and Shaquille O’Neal, he realized he was ready to take his career to the next level. And what better way to do so then making your television debut on the hottest show? Press Pass LA spoke with the very humble actor about his new role, his goals in the in the entertainment biz and how his former basketball dreams led him to acting!
PPLA: Congrats on your first official television gig. And what a great show to get your start on! How has it been on set and filming with the cast been so far?

SB: Thank you. Filming has been awesome. The Shameless cast is very talented. They have welcomed me in, and I feel right at home. It’s such a great show to be a part of, and to film eight episodes out of the gate is a blessing.

PPLA: Can you describe your character on the show and his story line?

SB: I play Kenyatta, the new love interest of Mandy Milkovich (played by Emma Greenwell). She’s been in an on-again, off-again relationship with Lip Gallagher. My character starts off somewhat reserved, but as the season advances, he really opens up and reveals his true self. He is just as shameless as everyone else in the cast, and will surely deliver some shockers this season.

PPLA: Were you a fan of the show before you landed the role?

SB: I knew of the show but I hadn’t watched it yet. Once I got the audition, I researched it and became an instant fan. It’s so well written and I love how it’s shot. It is outrageous and real and the same time.

PPLA: You got your start as a body double for some major athletes, how did you make the transition from sports to acting?

SB: I started in this business on the sports advertising side, so I’ve been blessed to work with the biggest names in the industry and the world’s most successful companies (Nike, Adidas, Coke, Powerade, Microsoft, Gatorade). I’ve been in over 40 national commercials (mainly as myself), but being a body double has definitely been part of that success. My first double job was as Shaquille O’Neal’s back model for an Icy Hot campaign. I’ve since doubled for Dwight Howard, LeBron James, Calvin Johnson, and stood in for Kobe Bryant and Blake Griffin. This allowed me to log many hours on set and get valuable experience in front of the camera. I’m no stranger to working with stars and big budgets. Bottom line, I love to perform, so acting was a very natural progression that gave me even more opportunities for artistic expression.

PPLA: Growing up, who inspired you to get into basketball?

SB: Growing up, Magic Johnson was my father’s favorite player, so in turn he became mine. He always schooled me on the old school players too like Earl the Pearl and Wilt Chamberlain. Guys from my era that I looked up to were Chris Webber, Jason Kidd and Shaquille O’Neal. Shaq made me want to be a triple threat. He showed me that I could be a star basketball player, actor and musical artist.

PPLA: Since you’re fairly new to the TV and film industry, what would be an ideal role for you to play?

SN: My role on Shameless has been great coming out of the gate, giving me the chance to show my chops as an actor. I’d love to be a lead on a drama like Grey’s Anatomy or Scandal. I’m actually pretty funny, and I know I could also hold my own as a sitcom star. I would have fit right in on Friends! wink… As for film roles, I have to do a cult comedy like Anchorman, Pineapple Express or Friday, an action film like True Lies, and play a role as some charismatic revolutionary leader!

PPLA: You’re bound to get a lot of new fans after this season on the show, so what’s the best way fans can reach out to you online? Twitter, Facebook, etc.

SB: Fans can Facebook me @Sheldon Bailey. I don’t tweet much but I’m @shelbailey. I’m new to Instagram but I’m sure to be active because I love taking pictures – @bigshelbailey. Also look me up on my YouTube Channel. 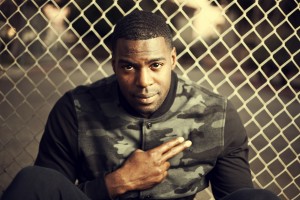 5. Favorite hobby (besides basketball): Reading and writing. I’m an author and I love writing poetry. Spoken Word is my thing.