SILENT HILL IS NO REVELATION 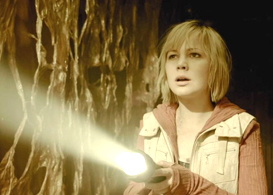 Silent Hill is revered as one of the scariest video games of recent memory. The disturbing images, the virtually endless throngs of disjointed, haunting, virtually indestructible enemies… everything that happened in the game literally had one on the edge of their seat. With the flop of the 2006 film of the same name, Michael J Bassett tries to take advantage of the game’s lingering popularity. Unfortunately, the scares come too few and entirely too far between.

The story picks up six years after the events of the original film. Heather Mason, played by Adelaide Clemens, has relocated to her sixth school in as many years. She has been protected by her father all this time so that she can’t be taken back to the twisted town filled with members of a secret society who are trying to destroy a demon bent on getting revenge. However, her father, played by Sean Bean, has been abducted by members of the cult who raised the demon in the hopes of luring Heather there of her own free will. If you can follow that, then you are better than most. The plot itself is confusing and convoluted. The issue with the story is that there are so many fine details and twists in the story that you want to hear more exposition. However, with all of the time that different characters are taking to explain what is going on, that is just more time that isn’t being spent attempting to haunt the characters of the audience.

The visuals in the movie were actually done very well. Transforming the buildings and surrounding area, as the darkness approached was truly spectacular. The use of 3D was somewhat inconsistent, but there were moments that it seemed very convincing, particularly with the changing of the scenery. The music utilized was perfect for building the tension from scene to scene. Perhaps one of the scariest scenes in the movie involves a group of nurses- all of them with deformed faces and wielding knives of varying sizes. Anytime that there was any kind of noise or movement in the room, they would start to move irregularly. That is what Silent Hill is more about; a complete feeling of helplessness on the part of a character as they are hopelessly surrounded by hideous creatures filled with malicious intent. But this scene and precious few others were the exception.

Unfortunately, despite the fact that this film is only 90 minutes long, you feel each moment of it, and not necessarily in a good way. Whether it’s exposition from soon to be demon fodder, conversations with seemingly important characters who are never seen again, or remarkably predictable “twists “ about secondary characters, it leaves much to be desired. One of the strengths of other horror movie franchises is the lack of significant development of the antagonist. We don’t need to know why the killer is maiming hordes of depraved degenerate adolescents; we just sit back and enjoy. And in the cases of more intricate and complicated horror stories, we are only given one or two brief scenes to provide enough back-story to comprehend the general story. In Silent Hill Revelation, we are shown something that is the stuff of nightmares briefly only to be shown a scene of individuals discussing the passing events. The first and most important rule of cinematography is to show and don’t tell. Silent Hill Revelation definitely has creatures and moments that will enter and stay in the nightmares of its audience for a while to come. However, instead of dodging these creatures as the harrowing tale makes a natural progression, there is a near constant feeling of waiting for something to happen.

The acting is done very well as we feel the tension and perpetual confusion of Heather. We want her to succeed when it comes to finding her father, and the creatures are among the most terrifying put to the big screen. But to have a 90-minute runtime and have it still feel as though it is painstakingly dragging along is a painful accomplishment to say the least. Only avid fans of Silent Hill would enjoy this; however, they would also be the ones most likely disappointed with the development of the story. One and a half stars out of four.