The following article will present irrefutable non-scientific opinions that prove in my mind without evidence or fact that Mike Judge’s (Office Space, King of the Hill) latest foray, HBO’s Silicon Valley is far funnier and believable than the heinously overrated The Big Bang Theory. A theory easily proven by observation.

Mike Judge always seems to know everything about whatever world he enters. Part of the charm and longevity of his cult satire Office Space is the incredible detail that allows one to re-watch it and get something new every time.

This is no different with Silicon Valley, which opens with a now irrelevant Kid Rock and his band rocking out to what turns out to be a few dozen nerds randomly scattered around the backyard of a mansion party. We learn that the party is for a programmer who sold his start-up to Google for a terra-load. Most of the computer lingo is beyond me. But even in this first scene we learn, without caricature or laugh track that nerds with new money are socially around fifteen years behind the times.

Big Bang’seems to know little about its world beyond bold-type characters that true nerds, such as myself, find offensive. Those characters, who on ‘Big Bang’ all sound alike and all fit into the basest stereotype like a proton torpedo through an exhaust port, are not so in Silicon Valley. Some of these guys are actually funny, not just unintentionally funny.

You get all kinds, it’s like Mike Judge and the Six or Seven Nerds: Brainy, Slovenly, Sarcastic-y, Gluey (he’s sort of an everyman filler), Pasty, and The Only Non-Whitey. They all have real names on the show, but Big Bang is far more egregious with their labels, and it is somehow as popular as Ming the Merciless. So for now we are going with these terrible labels that would make Kierkegaard roll over in his grave.

All have a part to play in this show, and each one is very distinct. Slovenly runs what he calls an ‘incubator’ where he sets up programmers who want to become trailblazers in his house. Brainy and Gluey work at an innovative and cutting edge software company where Mike Judge’s knowledge and obvious distaste for corporate ‘cult’ure is at its zenith. Images like the marketing team having a ‘bike meeting,’ or a man in a suit with his feet on the desk wearing toe shoes, it’s those types of douchey (seventh dwarf?) people that make up just a small bit of the wealth of data one will find with each viewing. You, the viewer get to decide what to laugh at this time, whereas Big Bang tells you when to laugh with its abhorrent laugh track. It’s dictatorial. Unnecessary. The laugh track is the Wesley Crusher of sitcoms (cue laughter). 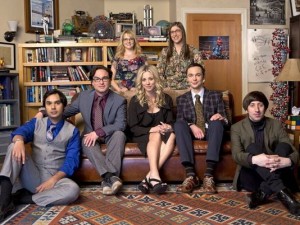 Anyways, Brainy comes up with some algorithm which to me is just a word that people use for something really really smart and computer-like that could revolutionize the internet and make him an instant millionaire, if he were to just sell it off to the company he works for who will no doubt use it for frivolous and perhaps even evil purposes. The other more interesting option is that he finds people to invest and he starts his own company and builds it himself, perhaps for the good of mankind. Brainy chooses the latter, and enlists the other nerds to work for him with a passionate speech that Paul Muad’Dib would be proud of  (obscure reference, look it up). Now he just has to build a company from the ground up. Realizing he has no business acumen whatsoever, not every smart person does after all, he poaches Pastey (Gabe from The Office) from his old job to help.

In conclusion, where Big Bang is just smart-ass, Silicon Valley is just smart. Great writing and jokes by diverse characters who all have the commonality of being smart, inventive people while also being believably plain imperfect people. If Brainy and that dirty Q-Tip from Big Bang were to fight, Brainy would get his ass kicked because he is the truer nerd. That’s why Silicon Valley > Big Bang.