SIN CITY: A DAME TO KILL FOR REVIEW

Frank Miller has gotten a chance to use cinema to expand his graphic story Sin City with the second installment known as A Dame to Kill For. Whether or not it holds up, however, is an entirely different matter.

There are a few stories interwoven within the film that takes place both before and after the events of the previous film, so discussing the plot is a relative moot point, outside of the particular style of narrative. When he first starting penning Sin City, Frank Miller dove deep into the noir style of the 1920s and 1930s, and has never really looked back.

It is apparent with the first Sin City, the direct to video release of The Dark Knight Returns, and of course the epic flop of The Spirit. The choice of style can be somewhat divisive amongst audiences, but he definitely uses every strength of said style to his advantage. If noir is something you enjoy, then Sin City is definitely on your watch list.

With so much of the story being dependent on the characters, the film’s greatest strengths and weaknesses both come from them. The actors chosen for each of the respective roles was, arguably, the best casting of 2014. From the film’s primary stars Jessica Alba as stripper vigilante who wants to avenge her first love Nancy and indestructible hulk Marv, played by Mickey Rourke, to secondary characters like detectives Mort and Bob, played by Christopher Meloni and Jeremy Piven respectively, every character is portrayed superbly and the characters are, more or less, the vision of the comics brought to life. However, that isn’t always to the film’s benefit.

One of the biggest criticisms of Frank Miller comes from his portrayal of women, both in film and in comics. Sin City: A Dame to Kill For is no exception, and is possibly one of his most egregious transgressions to date. Every female character, regardless of length of time on screen, role in the film or importance to the story, is either a prostitute, a stripper, or someone who just flat out uses her sex appeal (more often than not through a near constant on-screen nudity but also through seduction) to get what she wants. There isn’t a single female character in this film whose sexuality isn’t constantly on display, and it can be distracting at best to chauvinistically insulting at worst.

The cinematography makes a return in his unique style of having only one or two colors on the screen with the rest being just black and white. However, here it just completely falls flat. It is difficult to tell whether it is due to a higher definition of the film making it easier to detect more colors out of the gray scale, less attention went into detail to utilize the colors and the style or if it has just become somewhat passé, but there is a definite lack of pop in this film from its predecessor.

The second installment in what might become the Sin City franchise is lackluster to say the least. One big problem comes from the fact that most of the main characters seem virtually indestructible–over the course of the film, Marv is shot no less than 10 times and is still a better fighter than everyone else. It makes for a good superhero movie, but considering that these are all supposed to be normal people, it removes the suspense if you feel as though none of them are ever in any real danger. 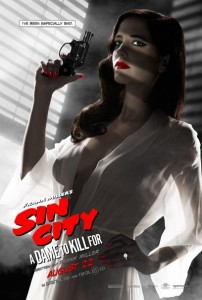 To say that the film was too violent or had too much nudity isn’t a legitimate criticism of the film; after all, this is based on one of the most violent graphic novels of all time, so a certain level must be expected. However, nudity for nudity’s sake is excessive and distracting, and violence with no repercussions is the kind of thing audiences have been receiving since the Arnold and Stallone days of yore, and is equally suspenseful.

So what we’re left with is interesting characters with good back stories, which have some of the cheesiest dialogue ever committed to film, a filming style that seems more dated than innovative and a narrative that, while not boring or slow isn’t particularly compelling either. This film has a very limited audience, and the box office to prove it. It isn’t recommended to anyone who isn’t a fan of Sin City, and is definitely not a starting point to get into it. One and a half stars out of four.