SINGLE IS THE NEW BLACK THIS VDAY: OK! MAGAZINE PARTY

We caught up with a few of our favorite celebs at OK! Magazines Pre-Grammy Party and with Valentines Day right around the corner, you’d be surprised just how many stars are single and leaning towards staying in or celebrating a GALentines day*. 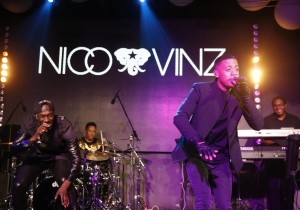 Bravolebrities GG Gharachedaghi of the Shahs of Sunset and Real Housewives Of Miami star Joanna Krupa agreed that Valentines Day is not only too commercial these days but they expect Valentines Day type lovin’ all year. After all, flowers and chocolates are always sweeter when they’re a surprise. GG admitted she’s doing a GALentines movie day since she “hates Valentines day, and it’s too soon to really celebrate it big with the new (secret) guy” she’s dating. For Krupa, who’s spending it away from her hubby, suggested she’d be sending him sexy pictures, “I haven’t decided if they’ll be lingerie or semi-nudes, but definitely something sexy.” 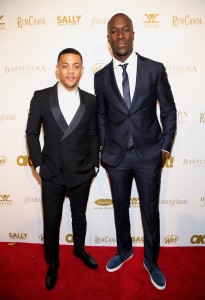 Gloria and Laura Govan stars of Growing Up Govan and Basketball Wives kept it extra real and then turned up the heat with their advice for single girls, “buy yourself something, at least you’ll get exactly what you want, maybe send yourself flowers,” otherwise, Laura says sex toys should be your gift to yourself. Well, ‘tis the season, right?

And for the dudes? Frankie Grande, Terrell Owens and OTown’s Eric Estrada, Trevor Penick, and Jacob Underwood all admitted they’re also singletons this V-day. (WHAT????) Frankie says he’ll be chillen with his momma since they’re “both single ladies” while Owens says his two baby girls are his Valentines. 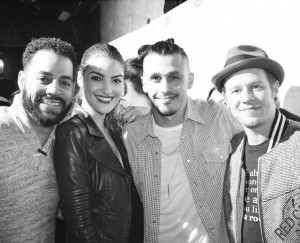 As for the guys of OTown, for starters, the years they’ve been away did them WELL and we’re so excited they’re back. Holy hot! They’ll be touring all year promoting their new album Lines and Circles that feature their two new singles “Skydive” and “Chasing after You” which are available on iTunes. Penick hinted towards a possible show date in L.A. this March but this weekend their busy schedules come to a Valentines Day halt and they will likely be found at “home eating bon bons and watching romantic comedies” or “at The Melting Pot eating chocolate all day.” Does anyone else agree that’s still sexy? Cue liquid dreams. Pun intended.
*GALentines Day: a take on a popular February 14th holiday in which a group of single girlfriends partake in movie watching and gossip while in sweat pants, messy buns and mud masks as they consume an abundance of wine and greasy foods of choice; likely to be pizza.