JPS Production/Booking out of Columbia, MO may be the new kid on the block as they have not even celebrated their first anniversary yet. However this is only a label and instead have taken the approach of go big or go home.

In the past week and half they have brought two major tours through smaller venues in Columbia  including Grammy award winning Saliva and Sleep Signals. Sleep Signals, out of Minneapolis Minnesota and on DIY record label, is currently on their two week “The Focus on the Lines Tour”. Tonight they take the stage at a neat venue, The Social Room, with two very well-known local Columbia Missouri groups. 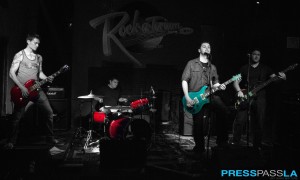 Dark Below, a local group from Columbia Missouri, took the stage to get the crowd going for a great night of music. Dark Below consist of Josh Campbell-lead vocals and guitarist, Josh Grove-backing vocals and bassist, Coty Penn-guitarist, and Brett Markovich-drummer. Dark Below is riding a musical high as they are fresh off their last show opening for Saliva. They are set to release their new EP in late July.  This energy was brought to the stage and the crowd fed off of it. As Dark Below wound down their set the crowd then became anxious to see the headliner who was set to take the stage next in a different approach to the bill.

Once all the gear and lighting was in place, everyone was ready for Sleep Signals to tear the roof off. As the stage lights dimmed and their intro begin to play their light sets lit up to only show glimpses of the bands backs. This changed quickly as their light systems took over the stage. Sleep Signals, led by Paul Kreuger-lead vocals, Robert Cosgrove- backing vocals and guitarist, Colin Smith- backing vocals and guitarist, Chris Schwab- bassist, and Zach Stadler- drummer. The energy mixed with their amazing style of music made for a show the Social Room will not forget. With the crazy light and smoke setup they brought to the crowd an arena style feel in a small club venue which allowed for a more personal connection between the band and fans. Sleep Signal left the stage knowing two things, they will be back to Columbia Missouri and that everyone in attendance was wanting more. 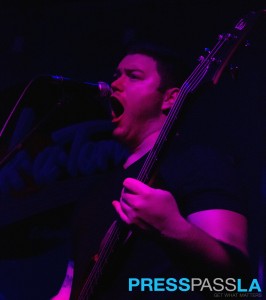 The biggest challenge of the night was for the closing act who had to follow two amazing performances. The Many Colored Death though took that challenge and smashed all doubts. The energy Brent Moore lead vocals and guitarist, Preston Rodgers backing vocals and bassist, and Shea Spence- drummer brought to the stage had Sleep Signals members jamming along in the crowd. The Many Colored Death was not just a group who got up there and said hey and here is the next song, but instead would joke a lot between themselves and their regular fans. The craziest part of their show was watching Shea smash the drums with no regret. There is only one other drummer that I’ve seen be that crazy on drums, Twisted Brown Trucker during a Kid Rock show. Each member fed off the other’s energy keeping the crowd alive in the early hours of the morning.

Overall, this is a show I will not forget. The energy that all three bands brought to the stage helped rock the small venue like we were in a big concert hall. The bands also used the small venue setting to interact with the fans before and after their sets, which was great to see. This may have been a midweek show, but that did not keep everyone from sticking around to the end to see three great acts give their all.