The famed and sometimes infamously known Lollapalooza made its 2015 mark in summer music fest chronicles. Most importantly, this year’s fest brought with it the mind-blowing after parties.

Hard Rock Hotel joined forces with Culture Collide to bring a two-day blowout with its “Chicago After Parties” series. Partygoers were offered a roster that was headlined by a Grammy-nominated hip-hop pioneer and a two-time Grammy winning indie pop authority.

What better way to put to bed the fest’s first day? I think that a story from hip-hop’s best storyteller, Slick Rick, was an exemplary solution for the first night of post-fest celebrations. 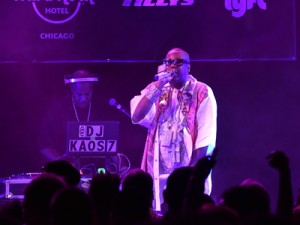 Walking into the party, the stage lighting radiated intense color that really set the ideal platform for the night’s hip-hop lineup. Priming the crowd, for Rick the Ruler’s entrance, was Chicago rapper Chris Crack. His performance commanded people’s attention with his fierce lyrics and edgy beats, although, I’m sure that jumping into the crowd certainly helped too.

Next up, sporting gold chains for days, Ricky Dee came onto the stage rocking his authentic fashion. Rotating sunglasses and his famous eye patch, he unleashed his storytelling skills with support from DJ Kaos.

Bombing the stage with old school 80’s flavor fused with some new school flare, the crowd erupted. Old throwback hip-hop songs had everyone, myself included, singing lyrics to classics such as “Mona Lisa”, “Children’s Story” and “The Show.” Party people in the house without a doubt witnessed an epic event.

Major props to a well thought out and organized event. The fact that there were only 300-350 people allowed for a truly intimate atmosphere that performers really were able to showcase their artistry expertise. It was good to see an after party lineup that included headliners that were not on Lolla lineup.

The Hard Rock Hotel Chicago delivered a phenomenal ending to the fest’s first day, as well as a night of hip-hop to be remembered for life.